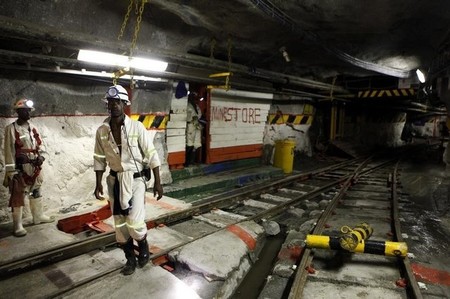 LONDON/BENGALURU (Reuters) – South Africa-focused platinum producer Lonmin reported a core profit on Monday after cost savings, and said it expected firm chemical and car industry demand for the rest of the year despite the Volkswagen diesel emissions scandal.

Its shares rose more than 14 percent in early trading, outperforming the wider mining sector, which was around 2 percent higher.

Lonmin’s shares have lost around 90 percent of their value over the last year, hit by a strike, rising costs and plunging platinum prices. In December, the company raised $400 million from selling new shares.

In its first-half results statement, Lonmin said it had cut losses per share to 1.8 cents from a loss of 164.6 cents the same time a year ago, and reported a core profit of $36 million versus a loss of $6 million in the first half of 2015.

Cost-cutting is ahead of schedule, with close to 70 percent of the full-year target of savings of 700 million rand ($45 million) already achieved.

CEO Ben Magara said in a conference call he did not anticipate further job cuts at current market conditions, but added conditions may change.

But Lonmin predicted emerging markets would spur demand as they seek to catch up with the “ever tightening emission standards of developed markets”.

It also said it saw firm chemical industry demand, while the jewellery market could remain static during the year.