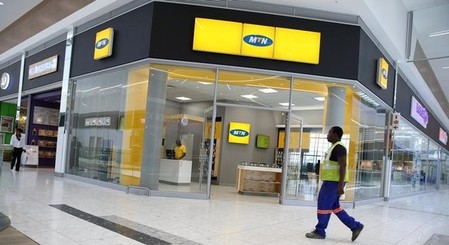 JOHANNESBURG (Reuters) – Africa’s biggest mobile phone operator MTN Group promised to pay a dividend in 2017 on Thursday, sending its shares surging as investors shrugged off a loss that underscored its risks in investing in frontier markets.

Founded with the help of Pretoria at the end of white rule in 1994, MTN is seen as one of post-apartheid South Africa’s biggest commercial successes but clashes with regulators in recent years have raised questions about governance and hobbled growth.

MTN reported a $108 million annual loss, its first in two decades, hit by a regulatory fine in Nigeria and unfavourable currency moves.

MTN agreed to pay a fine of 330 billion naira ($1.1 billion), reduced from $5.2 billion, in June last year after a prolonged legal battle to end a dispute in Nigeria over missing a deadline to cut off unregistered SIM cards.

Shares in MTN jumped more than 10 percent to 129.11 rand as its chairman said the losses would not be repeated and promised to keep dividends flowing.

MTN, held by many investors for its dividends, said it would pay 700 cents per share this year after declaring a similar amount for 2016.

“If you strip out the Nigerian fine, which is a once off thing, and forex moves, this company is not in a such bad shape operationally,” said Momentum SP Reid Stockbrokers’ analyst Sibonginkosi Nyanga.

Without one-off and non-operating items, which include about 6 billion rand in forex losses, MTN would have managed a profit, albeit 14 percent lower than 2016’s earnings.

“For even the most successful companies, you do have black swan events in your history and this was it. We hopefully are not going to see something like this again,” Nhleko told Reuters on the sidelines of the company’s results presentation.

However, MTN also faces an investigation by Nigerian lawmakers on whether it illegally repatriated $14 billion between 2006 and 2016.

MTN has denied any wrongdoing and Nhleko dismissed the allegations on Thursday as baseless.

The crux of the latest Nigerian allegations is that MTN did not obtain certificates declaring it had invested foreign currency in Nigeria within a 24-hour deadline stipulated in a 1995 law, and therefore the repatriation of returns on those investments was deemed illegal.