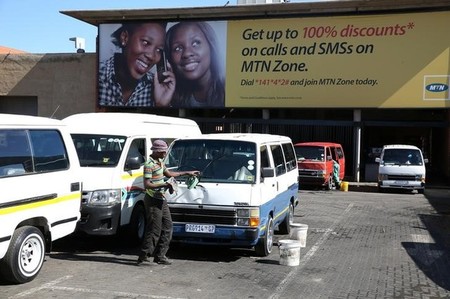 MTN agreed in June to pay a 330 billion naira ($1.05 billion) fine in a settlement with Nigeria for missing a deadline to cut off unregistered SIM cards from its network.

MTN said the fine, a third of the proposed initial penalty, wiped 10.5 billion rand ($768 million) — 474 cents per share — from headline earnings, South Africa’s main measure of profit, in the first six months of the year.

MTN had in any case been struggling to accelerate subscriber and profit growth as years of price wars and regulatory pressure hit margins and weakening economies squeezed consumer income.

“What you have here is a company that was gung-ho about Africa, where the operating environment has become difficult but they have shot themselves in both feet by losing control of the key markets and not paying attention to regulators,” said one MTN shareholder, who declined to be named.

MTN, held by many investors for its dividend flows, will pay out 250 cents per share for the first half of the year, down nearly 50 percent on a year earlier.

However, the company said full-year dividend could top the previously forecast 700 cents per share if operating conditions materially improve.

MTN also said the results were affected by unfavourable currency swings, underperformance in its home market and in Nigeria, where it had to cut off another 4.5 million SIM cards to comply with local registration requirements.

Founded with the South African government’s help after the end of apartheid in 1994, MTN had been seen as one of post-apartheid South Africa’s biggest commercial successes.

It has hired Vodafone European head Rob Shuter to lead its development, aiming to persuade its millions of clients to use their handsets for everything from shopping, paying bills to storing money.

Shuter, who will take over as chief executive by next July, replaces Sifiso Dabengwa who resigned last November after Nigeria imposed the penalty — which will be paid by the Nigerian business in the local currency.

Nigeria has been trying to halt the use of unregistered cards over concerns they are being used for criminal activity, including by Islamist militant group Boko Haram.

Shares in MTN, which had dropped by nearly one-third since October when Nigeria imposed the fine, see-sawed as investors digested the earnings statement.