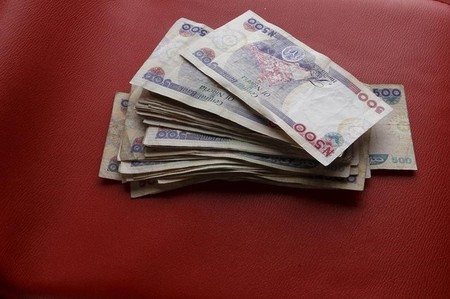 LAGOS (Reuters) – The Nigerian central bank has weakened the naira by 0.6 percent in the last two weeks through dollar interventions on the official market aimed at narrowing the spread with the black market, traders said on Tuesday.

The naira was trading at 307.50 on the interbank market on Tuesday, almost 30 percent weaker than on the unapproved retail market where it was quoted at 435 per dollar.

The central bank had been selling dollars at 305 levels since August to support the Nigerian currency. However it devalued the naira last month for individuals, paving the way for a possible broader move to narrow black market rates.

“The central bank is depreciating the currency. It’s a deliberate effort to narrow the gap with the black market,” one trader at a major local bank told Reuters.

The central bank, which declined to comment, is due to announce its decision on interest rates at 1330 GMT with markets watching for signs of a more relaxed foreign exchange rate regime after the government this month called for “market-determined” rate.

A Reuters poll expects the bank to leave its benchmark interest rate unchanged at 14 percent to tackle high inflation.

The West African country has tried to make the exchange rate more flexible before, leading to a 30 percent devaluation last year, only to reimpose a quasi currency peg, creating multiple exchange rates.

Two weeks ago Nigeria unveiled an economic recovery plan, including measures to relax foreign exchange restrictions, in a drive to pull Africa’s largest economy out of its first recession in 25 years.

It said the central bank will aim to achieve a market-determined exchange rate regime, but did not specify whether this would mean allowing the naira to float freely or keeping the current system of dollar injections to address shortages.

The bank’s governor later said he was not convinced about a currency float due to its effect on inflation, which fell for the first time in 15 months in February.

Instead the bank has sold millions of dollars via currency forwards on the official market in recent weeks to try to clear a backlog of demand and narrow black market rates which traded as weak as 520 last month.