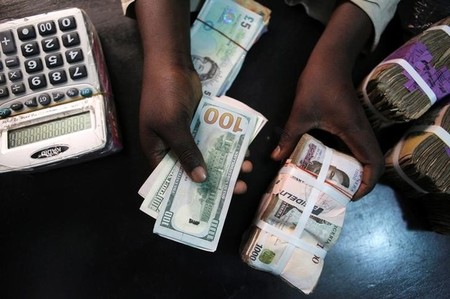 By Chijioke Ohuocha and Oludare Mayowa

LAGOS (Reuters) – Nigeria’s naira slumped 30 percent against the dollar on Monday after the central bank removed its currency peg in an effort to alleviate the chronic foreign currency shortages choking growth in Africa’s biggest economy.

The central bank sold $530 million for 280 naira per dollar at a special auction and later sold a further $86.5 million directly on the interbank market at 281 to 285 naira, traders said.

Monday’s rate was notably weaker than the 197 peg the central bank had maintained for 16 months before abandoning it last week in a bid to alleviate chronic forex shortages and stop the economy from sliding into recession.

The naira had traded just twice by midday, before the central bank held its special auction to clear a backlog of hard currency orders. Less than $1 million had changed hands, prompting an extension of the trading day to 5 p.m. (1600 GMT), dealers said.

Black market currency dealers were quoting the naira at 325 to 345 naira to the dollar, up to 10 percent stronger than on Friday, on expectations more hard currency liquidity on the interbank market would reduce demand on the street.

The central bank has said it may inject foreign exchange into the interbank market to increase liquidity and reduce a backlog of $4 billion backlog of demand, which could take four weeks to clear.

“We suspect that the best way to talk about the new exchange rate regime is still as a managed float, but a managed float that is responsive to market forces,” Citi analysts said in a note. “The new structure does provide a platform for the CBN (central bank) to easily step further away from the market.”

Non-deliverable forwards – contracts used to bet on future exchange rate moves – priced the naira at 302 per dollar in one month’s time. They initially weakened to a record 310 to the dollar.

The two-month contract < NGN2MNDFOR=> saw the naira at 313 per dollar in August. One year down the line < NGN1YNDFOR=> the naira was priced at 355.

Nigeria’s central bank is “reasonably optimistic” the naira will settle around 250 to the dollar after an initial period of weakness following a flotation, the bank’s governor said in a June 3 letter to President Muhammadu Buhari [L8N19836T].

Foreign investors and economists had called for a naira devaluation for months as the shortages of foreign exchange undermined economic growth and led to widespread capital flight.

The central bank said last week it would abandon the peg in a “managed float”. The median forecast from 10 analysts surveyed by Reuters had suggested the naira might trade on Monday at as much as 300 naira per dollar.

Nigeria’s economy, which contracted by 0.4 percent in the first quarter, faces its worst crisis in decades as a result of the decline in oil prices since 2014 and last year’s introduction of the currency peg.

With the naira expected to fall sharply, Nigerian products will become relatively cheap and imports more expensive. That should stimulate the domestic economy, but it is also likely to light a fire under already rising inflation.

“The new system should reduce the shortage of FX in the economy and – in the long run – reduce strains in the balance of payments by discouraging imports and boosting export competitiveness,” said John Ashbourne of Capital Economics.

“But the new system certainly does not mark the end of Nigeria’s economic problems.”

The OPEC oil exporter had resisted devaluing the naira for more than a year, while other major oil producers, including Russia, Kazakhstan and Angola, allowed their currencies to fall after crude prices collapsed.