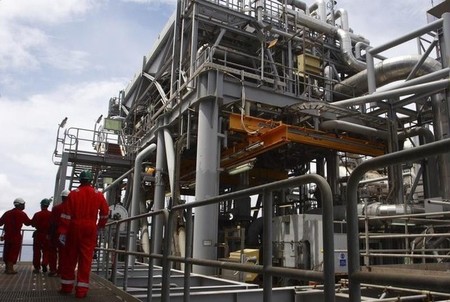 LAGOS (Reuters) – Nigeria’s recession deepened in the third quarter and oil production fell, the National Bureau of Statistics (NBS) said on Monday, as a dollar shortage kept Africa’s biggest economy in a stranglehold.

Gross domestic product contracted by 2.24 percent year-on-year, the NBS said. That was even worse than the 2.06 decline in the second quarter, when Nigeria fell into recession for the first time in 25 years.

The data came on the eve of an interest rate decision, with analysts expecting the central bank to hold benchmark rates at 14 percent. Inflation hit 18.3 percent in October, the highest in more than 11 years. [nL8N1DF1YL]

Prices have been pushed up by the dollar scarcity in a country dependent on imports, which has been exacerbated by currency restrictions imposed by the central bank last year in an effort to defend the naira. Oil sales are the OPEC member’s main source of dollars to fund imports.

“The ramp up in fiscal spending has been slower than anticipated, and the policy response in general remains weak,” said Cobus de Hart, economist at NKC Economists.

The NBS said oil production fell to 1.63 million barrels per day, down from 1.69 million in the second quarter.

“We were expecting a more shallow contraction,” Standard Chartered Africa chief economist Razia Khan said. “Much of it seems to have been driven by the outsized contraction in the oil sector once again, with much lower levels of oil production than we had expected.”

She said FX reforms were needed to “restore positive momentum” to Nigeria’s economy.

NBS said the non-oil part of the economy grew by 0.03 percent in the third quarter, compared with negative growth in the first two, which was “largely driven” by 4.54 percent growth in the farming sector.

The president’s special adviser on the economy, Adeyemi Dipeolu, said the growth in agriculture, which the government wants to boost to reduce its reliance on oil sales, was a sign of “green shoots of economic recovery”.

A statement issued by the vice president’s office said the figures pointed to the success of President Muhammadu Buhari’s economic policies, despite the recession. It blamed the latter on a series of attacks by militants on oil and gas facilities in the southern Niger Delta since January.

Attacks have ramped up in the last few weeks following a lull that lasted a few months while militants and community leaders, who want a greater share of Nigeria’s energy wealth to go to the region, held talks with the government. Crude oil sales account for two-thirds of government revenue.

In October, the NBS said the economy was likely to shrink 1.3 percent in 2016, a sharp downward revision of its estimates at the beginning of the year, prompted by dramatic falls in the currency. The International Monetary Fund has predicted a contraction of 1.8 percent this year.

A senior Moody’s analyst told Reuters that Nigeria’s economy could expand by 2.5 percent next year if it could produce 2.2 million barrels of oil per day – the level at which the government made its budget calculations.