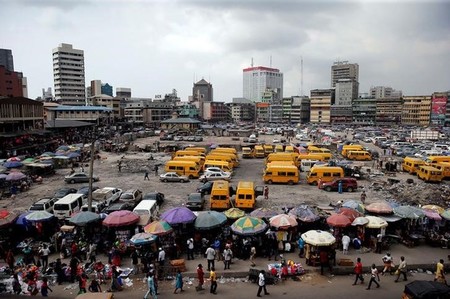 LAGOS (Reuters) – Nigeria’s economy contracted 1.5 percent in 2016 due to lower oil revenues and a shortage of hard currency, the National Bureau of Statistics said on Tuesday, its first annual contraction in quarter of a century.

Africa’s largest economy slid into recession in the second quarter of 2016 as a slump in crude prices hammered the OPEC member’s public finances and battered the naira currency. Crude sales make up two-thirds of government revenue.

“This contraction reflects a difficult year for Nigeria, which included weaker inflation-induced consumption demand, an increase in pipeline vandalism, significantly reduced foreign reserves and a concomitantly weaker currency,” the statistics office said in a report.

The International Monetary Fund had predicted Nigeria’s economy would shrink 1.8 percent in 2016. A Reuters poll forecast a 1.2 percent contraction..

Fourth-quarter national output shrunk by 1.3 percent, it said. However, non-oil sector production fell by only 0.33 percent during the three months to end-December.

Vice President Yemi Osinbajo said in a statement the GDP data suggested Nigeria was “well on its way out of recession”.

“The expectation is that this trend and the slowing down of month-on-month inflation will enable an early return to positive growth in the economy,” the statement said.

Nigeria has been running short of dollars as a result of lower foreign exchange earnings, which has weakened the local currency on the black market, where it trades far lower than the official interbank rate of 305 naira.

Foreign exchange reserves rose to a more than 19-month high of $29.45 billion as of Feb. 24, central bank data showed on Tuesday, but still remain far off their peak of $64 billion in August 2008.

Though the central bank has stepped up dollar supply in recent days after effectively devaluing the naira for private individuals, the currency still trades at a more-than 30 percent premium on the black market.

The government targets an annual growth rate of 7 percent GDP by 2020, as part of its medium-term economic recovery.

But the strength of the recovery will depend on the pace at which authorities can put in place much-needed reforms, said Razia Khan, chief economist for Africa at Standard Chartered Bank.

“The very shallow contraction in non-oil GDP growth in Q4 2016, raises hope of a more meaningful recovery in non-oil GDP in Q1 2017, buoyed both by improved budget spending and some improvement in FX availability.”