OPEC fails to agree policy but Saudis pledge no shocks 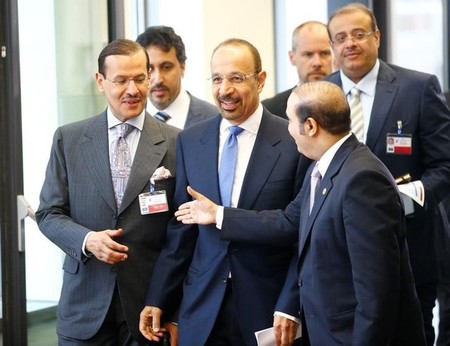 VIENNA (Reuters) – Saudi Arabia promised on Thursday not to flood the oil market with extra barrels even as OPEC failed to agree on output policy, with Iran insisting on the right to raise production steeply.

Tensions between the Sunni-led kingdom and the Shi’ite Islamic Republic have been the highlights of several previous OPEC meetings, including in December 2015 when the group failed to agree on a formal output target for the first time in years.

Several OPEC sources said Saudi Arabia and its Gulf allies had tried to propose a new collective ceiling in an attempt to repair OPEC’s waning importance and end a market-share battle that has sapped prices and cut investment.

But OPEC sources said the organisation had failed to agree on output policy and set a new ceiling.

“We will be very gentle in our approach and make sure we don’t shock the market in any way,” Falih told reporters.

“There is no reason to expect that Saudi Arabia is going to go on a flooding campaign,” Falih said when asked whether Saudi Arabia could add more barrels to the market.

The market has grown increasingly used to OPEC clashes over the past two years as political foes Riyadh and Tehran fight proxy wars in Syria and Yemen.

Saudi Arabia effectively scuppered plans for a global production freeze – aimed at stabilising oil markets – in April. It said then that it would join the deal, which would also have involved non-OPEC Russia, only if Iran agreed to freeze output.

Tehran has been the main stumbling block for the Organization of the Petroleum Exporting Countries to agree on output policy over the past year as the country boosted supplies despite calls from other members for a production freeze.

Tehran argues it should be allowed to raise production to levels seen before the imposition of now-ended Western sanctions over Iran’s nuclear programme.

OPEC is pumping 32.5 million barrels per day (bpd), which would give Iran a quota of 4.7 million bpd – well above its current output of 3.8 million, according to Tehran’s estimates, and 3.5 million, based on market estimates.

That “OPEC could not agree on a relatively benign deal which would have been constructive for price is a sign that political differences are undermining the organisation”, said Gary Ross, founder of U.S.-based PIRA consultancy.

“It is bearish short-term for oil prices. But what is also important is that Saudis are not planning to flood the market and want higher prices,” he added.

Falih was the first OPEC minister to arrive in Vienna this week, signalling he takes the organisation seriously despite fears among fellow members that Riyadh is no longer keen to have OPEC set output.

“There could be shorter-term situations in which, in our view, OPEC might intervene and yet other situations — such as long-term growth of marginal barrels — in which case it should not,” Falih told Argus Media ahead of the meeting.

At its previous meeting in December 2015, OPEC effectively allowed its 13 members to pump at will.

As a result, prices crashed to $27 per barrel in January, their lowest in over a decade, but have since recovered to around $50 due to global supply outages.

Until December 2015, OPEC had a ceiling of 30 million bpd – in place since December 2011, although it effectively abandoned individual production quotas years ago.

For a Take-a-Look on Reuters stories on OPEC, click on