Peter Njonjo : from a top IT job to BBQ! 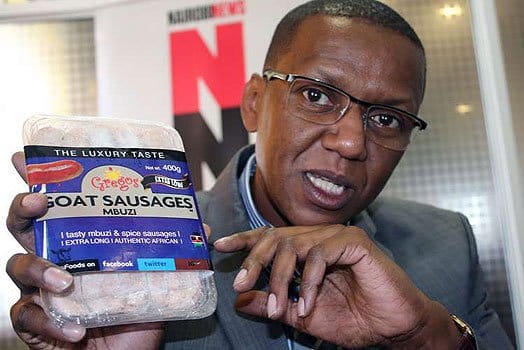 Peter Njonjo made a risky decision last year. He left his top IT job at the European Union to launch his own prepared meats company, Gregos Foods. He says he was compelled by his love of cooking and his search to finding high-quality barbecue products in his native Kenya. He explained: “Kenya has the best meat in terms of the world, but what we are actually getting in terms of retail is not the best. I thought we could do better so we started off.” In just over one year he’s gone from a backyard conversation to seeing his products on supermarket shelves. This is a massive achievement in a country that is dominated by one industry leader: Farmer’s Foods, which has an enormous 44% of the market share. Avid cooks, Njonjo and his friends were inspired to make their own meat products by a lack of processed meats available in stores. They realized there was a gap in the market and that their homemade products were in demand and could be produced on a larger scale. He conducted a vast amount of market research and customer testing before deciding that this was a viable business. They created products such as goat sausages, bacon and beef burgers and wrapped chicken thighs, which were all extremely popular with their product testers. Although he initially knew very little about this industry, he was determined to make the company a success.

Smart business decisions that have led to success

Seven months later the first factory was opened. There were a number of factors that determined the success of the company, most of which were related to Njonjo’s business acumen and sharp, academic mind. First, he chose to rent space in an already operational factory that was running under capacity instead of an expensive new build. This factory was located in Kikuyu, a small agricultural town about 20 km outside of Nairobi. It was a central location for distribution, but considerably cheaper than renting inside the capital city, and much closer to the meat producers they would rely on. Next, he reached out to his network of friends and ex-colleagues for assistance in areas that he lacked specific expertise, such as HR, finance and marketing. This avoided expenses on external consultants services, and reduced the startup costs considerably. They relied on social media marketing, local events and word-of- mouth for publicity and slowly built a loyal consumer base through their home and business deliveries. They eventually broke into retail and secured deals with supermarkets to stock their products.

He explained that they don’t expect to make any money in the first year, offering deals to spread brand awareness and ploughing profits back into increasing production capabilities. The company also elected to use influencers and food bloggers to drive sales and publicity. The biggest challenge, says Njonjo, is competing with industry leaders, who have significant visibility and customer loyalty. The focus has been maximizing their exposure to challenge these market leaders, something many competitors/newcomers have failed to do in the Kenyan food industry.

The future for Njonjo and Gregor Foods

After just one year in business, “Gregos Foods” is booming. The company has plans to expand its manufacturing capacity to meet growing demand and have recently expanded into wholesale, as well as catering for hotels and restaurants. The long-term goal is to expand into the export market, supplying products to neighboring African countries, and even beyond. They intend to collaborate with other small-scale producers who have unique recipes and are looking for production and distribution partners. This could see Gregos Foods growing into a parent company for a number of different producers, while at the same time helping other people like Njonjo who had a plan/an idea but struggled to compete with dominant giants in the food industry. His advice to other entrepreneurs is to be realistic about the market: “Give yourself time to grow, go for what you can do best and ensure that you add value as opposed to being ordinary.” With the rise of food and manufacturing entrepreneurs across the continent, people like Njonjo have been encouraged to follow their dreams. Although he has no experience in the in food industry, his business expertise has enabled him to succeed where others have failed.

3 Africa, Business, Featured Peter Njonjo : from a top IT job to BBQ!