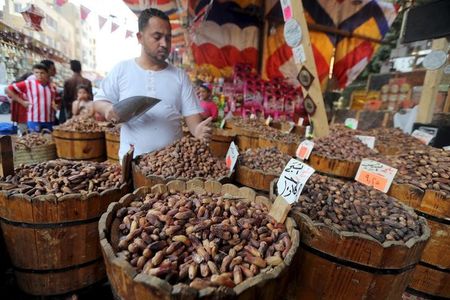 CAIRO (Reuters) – Egypt’s urban consumer inflation jumped to its highest level since June, data from the state statistics agency showed on Thursday, propelled by the rising cost of food even as the state takes new measures to keep prices in check.

The figure rose to 11.1 percent in November from 9.7 percent in October, CAPMAS said, compared with 11.4 percent in June.

Egypt said in November it would control the prices of ten essential commodities and use its state grain buying agency to import a broader array of goods in an effort to curb inflation.

However, November core inflation, which excludes volatile items such as fruits and vegetables, rose to 7.44 percent from 6.26 percent in October, the central bank said.

The higher inflation figures might influence the central bank’s decision on interest rates at a monetary policy committee meeting scheduled for next week, Capital Economics said in a research note on Thursday.

“For now, with the domestic economy struggling, we suspect that interest rates will be left on hold next week. But today’s figures … mean that there is a growing risk that the (central bank) will be spooked and decide to hike rates,” the note said.