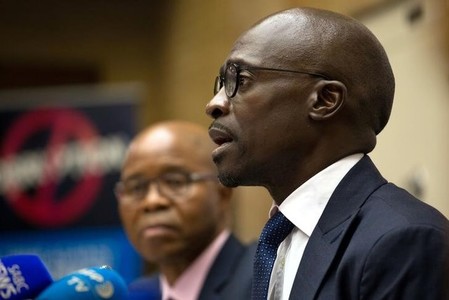 PRETORIA (Reuters) – South Africa’s finance minister dismissed calls from one of his own advisers for the nationalisation of banks and mines on Wednesday, and acknowledged that investors had been unsettled by turmoil surrounding his ministry.

Malusi Gigaba, appointed in an abrupt resuffle late last month that shook markets and prompted two ratings downgrades, told journalists he needed to reassure investors as he prepared to fly out to an IMF meeting in the United States.

Uncertainty over the government’s fical policy rose again over the weekend when one of Gigaba’s advisers, Chris Malikane, wrote an opinion piece in South Africa’s Sunday Times backing the nationalisation of mines, banks and insurance firms.

Gigaba said the article by the economics professor at Johannesburg’s University of the Witwatersrand did not represent government policy.

“The technical advice he provides will never detract from the policies of the (ruling) African National Congress which don’t entail the wholesale nationalisation of the mines, the insurance industries and the land,” Gigaba told journalists.

Fitch and S&P Global Ratings both downgraded South Africa to junk after Gordhan’s sacking. Gigaba reiterated on Wednesday that he would meet Moody’s to give the ratings agency assurances about government policy in a bid to avoid a third downgrade.

Some political figures in the opposition have called for nationalisation of mines, saying private companies have failed to spread wealth and control of the economy beyond a small black elite and the white minority that ran the country under apartheid.