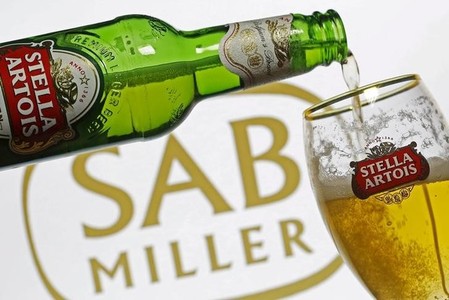 LONDON (Reuters) – Brewer SABMiller, in the process of being bought by Anheuser-Busch InBev, reported lower quarterly revenue on Thursday, hurt by tough conditions in some African markets.

The maker of beers such as Castle Lager, Peroni and Grolsch said group net revenue fell 4 percent in its first quarter, ended June 30, with volume flat.

Excluding the impact of acquisitions, disposals and currency fluctuations, revenue rose 2 percent as gains in Europe, South Africa and Latin America offset more challenging conditions in other African markets, where volume was hurt by economic volatility and tough conditions.

In its trading statement on Thursday, which comes ahead of its annual general meeting, SABMiller did not mention its pending $107 billion takeover by Anheuser-Busch InBev, which received approval by the United States on Wednesday.

The takeover of the London-listed brewer has come under scrutiny in recent weeks as a drop in the British currency has reduced the relative attractiveness of the all-cash offer aimed at most SAB shareholders.

Two activist hedge funds, TCI and Elliott Advisors, have taken small stakes in the brewer, raising the possibility that shareholders may push to try to get improved terms.