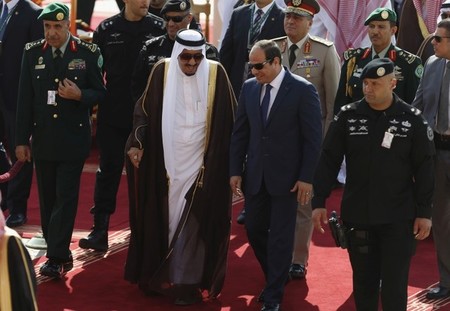 CAIRO (Reuters) – Saudi Arabia is expected to sign a $20 billion deal to finance Egypt’s petroleum needs for the next five years and a $1.5 billion deal to develop its Sinai region, two Egyptian government sources told Reuters on Tuesday.

The agreements are tabled to be signed on Thursday during a visit to Cairo by Saudi Arabia’s King Salman, a rare foreign trip.

Saudi Arabia, along with other Gulf oil producers, has pumped billions of dollars into Egypt’s flagging economy since the army toppled President Mohamed Mursi of the Muslim Brotherhood in 2013 after mass protests against his rule.

The Gulf Arab countries see the Muslim Brotherhood as a threat. Egypt is struggling to revive an economy which unravelled following an uprising that toppled President Hosni Mubarak in 2011.

The development deal for Sinai comes at a time when Cairo is fighting an Islamist militant insurgency there and discontent and poverty among the population there is rife, residents say.

The petroleum financing will have an interest rate of 2 percent and a grace period of at least three years, the sources said.

Separately, the deputy head of the Saudi-Egyptian Business Council said on Tuesday that Saudi businessmen will invest a total of $4 billion in projects including the Suez Canal, energy and agriculture, and had already deposited 10 percent of that sum in Egyptian banks.