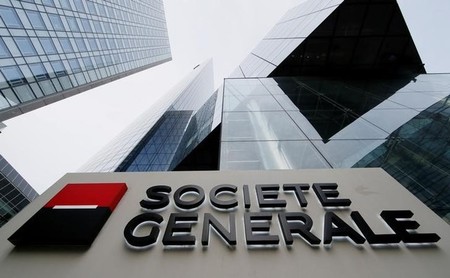 By Maya Nikolaeva and Julien Ponthus

France’s second-biggest listed bank reached an 11th-hour settlement over LIA allegations that trades were secured as part of a “fraudulent and corrupt scheme” involving the payment of $58.5 million by SocGen to a Panamanian-registered company.

“By settling this dispute … we avoid a long trial that would have demanded a lot of resources,” SocGen CEO Frederic Oudea told journalists on a results call, adding that the bank was now able to concentrate its energy on its main businesses.

A spokesman in Paris said SocGen was paying 963 million euros as part of the Libya settlement, which overshadowed a fall of 19 percent in SocGen’s first-quarter net income to 747 million euros which it posted on Thursday.

Asked if SocGen had taken any sanctions against employees or if any of its staff had left the bank as a result of the case, Oudea said “appropriate measures” had and would be taken, while SocGen added that it had apologised to the LIA.

The Libyan fund lost a high-profile case last summer against Goldman Sachs in which it tried to claw back $1.2 billion from the Wall Street firm relating to nine equity derivatives investments carried out in 2008.

The settlement also marks the end of proceedings against Libyan businessman Walid Giahmi who controlled Lenaida, the Panamanian-registered company alleged to have been paid by SocGen, which was dissolved in 2010.

“This is a complete exoneration of my client, who has been subject to serious allegations involving bribery and intimidation for the past three years,” Giahmi’s lawyer, Kathryn Garbett, head of fraud defence at Mishcon de Reya, said, adding that her client was relieved the case was over.

U.S. TALKS NOT OVER YET

While significant, the Libyan settlement does not mark the end of SocGen’s legal woes, with the bank still in talks with U.S. authorities over dollar transfers it made on behalf of entities based in countries subject to economic sanctions.

Oudea, who is seeking to turn the page following a series of legal disputes and scandals so that he can focus on a new strategic plan under a new management structure, said those discussions would continue for at least several months.

“Among French banks, SocGen is the only one that does not seem to be able to get rid of recurring reputational problems,” analysts at Kepler Cheuvreux, who kept a “buy” rating on SocGen, said.

SocGen shares were down 0.4 percent at 1030 GMT following the results, which came a day after BNP Paribas, France’s biggest bank by market capitalisation, beat forecasts with higher first-quarter profits.