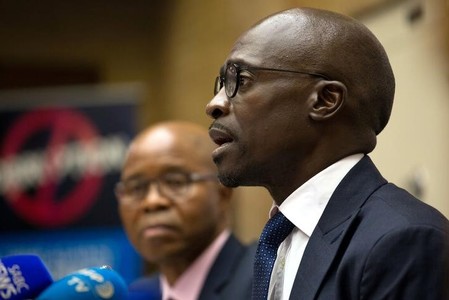 CAPE TOWN (Reuters) – South Africa’s new leadership announced on Wednesday it was taking the politically risky step of raising value-added tax for the first time in 25 years, part of efforts to cut the deficit and stabilise debt under new President Cyril Ramaphosa.

The government of Africa’s most industrialised country has to plug a revenue hole in its budget and repair its economy after nine years of mismanagement under the scandal-plagued Jacob Zuma.

The move to raise VAT to 15 percent from 14 starting in April is expected to generate an additional 23 billion rand ($2 billion) of revenue in 2018/19.

But with the VAT rate unchanged since 1993 the move was likely to prove unpopular ahead of a national election next year.

“This is a tough, but hopeful budget,” Finance Minister Malusi Gigaba said, acknowledging the reality in his budget speech to parliament on Wednesday.

“We decided that increasing VAT was unavoidable if we are to maintain the integrity of our public finances.”

As Gigaba read his budget speech, the rand extended gains to 0.81 percent against the dollar, government bonds firmed and retail shares on the stock exchange fell.

Whatever cabinet Ramaphosa finally settles on will face an uphill battle to revitalise growth and create jobs in a nation still polarized by race and inequality more than two decades after the end of white-minority rule in 1994.

Much of the blame for the state of the economy has been laid at the door of Zuma and his allies. He was forced to step down as president this month by the ruling African National Congress (ANC), following a series of scandals. He has denied all wrongdoing.

But treasury officials sought to project a relatively optimistic outlook as they assessed economic prospects for the immediate future.

Gigaba said poor households would be cushioned against the VAT rate rise through a zero-rating of basic food items such as maize meal and beans, and welfare payments increases.

And the Treasury saw GDP growth at 1.5 percent this year, up from an estimated 1 percent last year, helped by a recovery in agriculture and improved investor sentiment.

South African debt faces the risk of a downgrade to “junk” by Moody’s after downgrades to sub-investment grade by S&P Global Ratings and Fitch last year. Moody’s said it would make a ratings decision soon after the budget announcement.

“We believe we have done enough to avoid a downgrade. We have taken the tough decisions. You can see our debt rates stabilising, you see our budget deficit improving,” Gigaba told a media briefing separately.

‘ASSAULT ON THE POOR’

But opposition leader and head of the Democratic Alliance party Mmusi Maimane said the budget meant the cost of living for poor people would rise sharply.

“This is a budget that is an assault against poor people. What we saw today is a consequence of nine years of mismanagement of the economy by the ANC.”

The ultra-left Economic Freedom Fighters, which has six percent of the seats in parliament, boycotted the speech. It demanded that Gigaba, a Zuma ally, be removed.

The Treasury said South Africa faced a 48.2 billion rand revenue gap in the current 2017/18 fiscal year ending in March, down from an earlier estimate of 50.8 billion rand, and that the revenue shortfall was expected to continue into the medium term.

In a sign that it was mostly middle to high income earners who were targeted by the tax increases, the Treasury said the excise duty on luxury goods would be raised to 9 percent from 7 percent, among other taxes.

The budget deficit is expected to narrow to 3.5 percent of gross domestic product (GDP) by 2020 from 4.3 percent in the 2017/18 fiscal year, while gross debt is seen narrowing to 56 percent of GDP in the 2020/21 fiscal year from nearly 60 percent seen in the October mid-term budget statement.