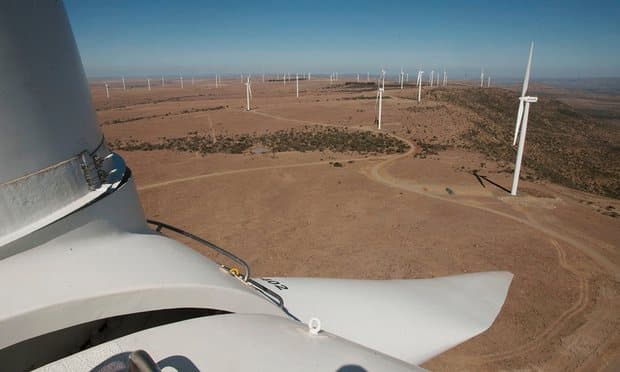 Long dependent on coal, South Africa has become the leader on the continent in developing renewable energy sources thanks in part to a competitive bidding process that helps keep costs low. South Africa had accepted a total of 92 projects providing an estimated 6,300 megawatts as of April. The projects represent more than $13 billion in private investment.

The Cookhouse wind farm on the country’s eastern cape is the largest installation, producing 138 megawatts of electricity since it started feeding the power grid in 2014. But wind, solar and biomass projects are popping up all over the countryside. Still, South Africa remains highly dependent on fossil fuels. It is the 11 th largest emitter of carbon output from energy use in the world. But it is making progress with renewables. Tina Joemat-Pettersson, South Africa’s minister of energy said the country had added a total of about 4,300 megawatts of renewable energy capacity between 2011 and 2015 alone.

One driver is cost. By last year, the price of wind energy from new projects had dropped to five cents per kilowatt-hour, about half the cost of coal. “Not only is technology producing much cleaner power, it is doing so at a lower cost than traditional fossil fuel technologies,” Evan Rice, chief executive of Greencape, a government funded not-for- profit development agency in Cape Town, said.

In partnership with the city of Cape Town, the national government, and Germany, Greencape is launching the South African Renewable Energy Technology Center, which will train 250 technicians annually to operate renewable energy systems around the country.

Anton Eberhard, a professor at the Graduate School of Business at the University of Cape Town, said South Africa’s competitive bidding process has helped keep costs low while assuring efficient development. Rather than negotiating with a vendor directly on a case-by- case basis, the bidding process uses competitive tenders and may give awards to multiple bidders,

Eberhard said. He said the transparent process leaves less room for corruption, which has hampered development efforts in other countries. The process also offers financial advantages, Eberhard said, noting that prices bids had dropped by 48 percent for wind and 71 percent for solar energy over the course of four rounds of bids during the past several years.

He said advances in battery technology will reduce the problem of interuptions in wind and solar power when there is no wind or sun. This will drive more development of these resources and reduce reliance on fossil fuels.

The developments are also benefitting local communities. For example, a factory that will produce wind towers in the economically depressed township of Atlantis outside Cape Town is expected to employ 200 people to build 150 towers a year. Rice expects employment to grow as production ramps up. Also, 15 percent of the sale of energy itself goes into a community trust that enables local trustees to funnel money into education, health care and economic development locally.

Despite the promise of renewables, South Africa is not turning away from fossil fuels entirely. The government plans to open up 20 percent of the country to shale fracking and President Jacob Zuma has approved a deal to buy eight nuclear power plants from Russia at a cost of $84 billion.

The country is also building Medupi, the largest dry cooled coal-fired power station in the world. Construction began in 2007 but has been mired in cost overruns and delays for years. Once completed, it is expected to produce more than 4,000 megawatts, about the same amount that South Africa developed with renewable projects in just four years. Still, Berg and others see a bright future for renewables in South Africa and beyond.

The continent, he said, has “the opportunity to leapfrog the old centralized large scale fossil fuel power and big grid paradigm. With technology and project prices continuing to drop, and rapid breakthroughs in battery and other storage technologies, I have no doubt that renewables will address all of our power needs in time.”