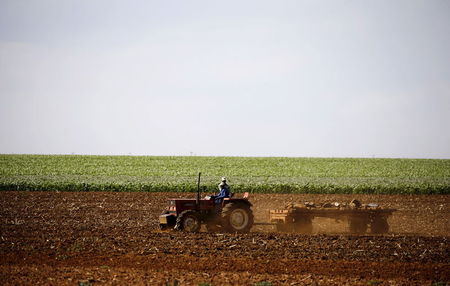 JOHANNESBURG (Reuters) – South Africa is laying the groundwork in case it needs to import as much as 4 million tonnes of maize after successive seasons of drought threaten the crop in Africa’s top producer of the grain, which is usually a net exporter.

Siyabonga Gama, chief executive of Transet, South Africa’s state-run ports and rail company, told Reuters in an interview on Tuesday the company’s talks with the industry indicated that 4 million tonnes was the “worst-case scenario”.

“The rail side is not the issue. We have the capacity there to absorb that much maize,” he said.

He said South Africa’s ports were designed mostly to export grain rather than import it, but this hurdle could be overcome.

“The issue is the import silo capacity so there are a few things that we will need to tweak. It could still be done.”

Other industry scenarios see a need to import perhaps 2.5 million tonnes or even as little as 700,000 tonnes, depending on rainfall patterns for the rest of the season.

The outlook is not good as an El Nino weather system is exacerbating a scorching start to the growing season, following drought conditions in the previous one which shrivelled the crop by a third to 9.94 million tonnes, the lowest since 2007.

This is helping to fuel inflation in Africa’s most advanced economy as the white variety of maize is a staple that provides much of South Africa’s caloric intake.

South Africa’s central bank has repeatedly voiced its concern this year about the impact of drought and food prices on the inflation outlook.

The March maize contract climbed over 2 percent to an all-time high of 3,662 rand ($247) a tonne on Tuesday after forecast rain over the weekend in the western part of the maize belt failed to meet expectations.

The December contract is fetching 3,705 rand a tonne, up 75 percent so far in 2015 and within striking distance of its record high of 4,000 rand reached last year, according to Thomson Reuters data.

“Initial indications are that it is going to be a very big import year. We will firm up the actual demand by January or February and we will have a plan at the correct time,” Gama said.

He said aside from the main grain facilities at the ports of Durban and East London, South Africa can also use Port Elizabeth and Cape Town and could even use Richards Bay, mostly used for coal exports, in a pinch.

(By Ed Stoddard. Editing by James Macharia and David Evans)