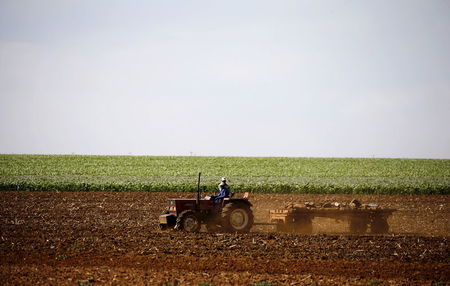 JOHANNESBURG (Reuters) – Mounting jitters about a searing drought pushed South African white maize prices to record highs on Friday and traders said the ceiling had not been reached as farmers fail to plant in the Free State province.

The rand’s plunge to record lows has also spurred the rally, which has serious implications for the inflation outlook in Africa’s most advanced economy as white maize is the main source of calories for lower-income households.

South Africa’s central bank, which is in a tightening cycle, has repeatedly voiced concern about the drought and food prices.

The December white maize contract, which expires next week, was 0.6 percent higher at 4,140 rand a tonne after scaling a peak of 4,160 rand, according to Thomson Reuters data.

“Some relief rain fell yesterday and last night but it is still too little in the Free State and there are still farmers there who have not planted yet,” said Piet Faure, a trader at CJS Securities.

The weather forecast for the next two weeks in maize-growing areas of the Free State is also not good, traders said. Farmers who have not yet planted will soon run out of time to do so.

An El Nino weather pattern has exacerbated the drought and follows a bad last harvest when dry conditions shriveled the crop by a third to 9.94 million tonnes, the lowest since 2007.