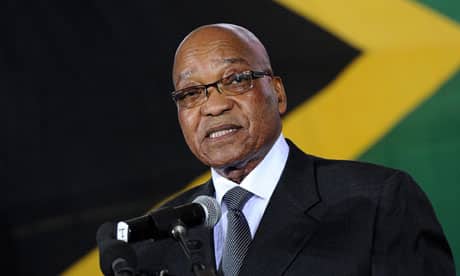 Analysts point to potential losses for the African National Congress in upcoming local elections, which could pave the way for Zuma to exit the presidency later this year.

As business confidence in the government and popular opinion of Zuma plummet, some are predicting the ANC could pave the way for Zuma to exit the presidency later this year if the local elections go badly.

Zuma’s six-year tenure has been mired by accusations of corruption, policy missteps and controversial appointments that his critics contend have created economic stagnation and stifled investment in South Africa.

Zuma caused a national uproar in December when he abruptly fired a respected finance minister and then was forced to sack an inexperienced replacement only four days later amid protests and plunging currency rates and capital markets.

The rand dropped to under 16 to the dollar for the first time and the benchmark stock index lost the equivalent of $11 billion after Zuma fired finance minister Nhlanhla Nene and replaced him with parliamentarian David van Rooyen on Dec. 9.

Business leaders protested while thousands of South Africans took to the streets using the slogan “Zuma Must Fall” and demanding that Zuma leave office.

ANC leaders persuaded Zuma to quickly replace van Rooyen and a measure of stability was restored with the appointment of a third finance minister, Pravin Gordhan who had served in that post from 2009 to 2014.

South Africa, the most industrialized country on the continent, was under economic pressure well before the latest events. The rand has steadily declined, losing half its worth since Zuma took office in 2009. The economy is stagnant, unemployment is high, and the country is undergoing its worst drought since record keeping began in 1904.

Maize production has dropped by 30 percent and prices on the South Africa Futures Exchange have more than doubled in the past year. While agriculture makes up only a small fraction of South Africa’s gross domestic product, the country will be forced to import food, including as much as $710 million worth of maize, which will result in even higher prices.

Christo Joubert, a price analyst with the National Agricultural Marketing Council, said the council expected prices to increase by as much as 20 percent in 2016. “The drought is hitting everything,” Joubert said.

The higher prices will present further struggles in a nation with an unemployment rate of 30 percent. Also, analysts predict the nation’s economy could stagnate in 2016 for the third straight year, with a growth rate of less than 1 percent.

Business confidence and popular support for the incumbent government have also dropped.

The business community’s confidence dropped to its lowest rate in 20 years, according to the South African Chamber of Commerce and Industry. As the finance upheaval unfolded in December, the chamber’s confidence index declined to 79.3 percent, the lowest level since June 1993.

Meanwhile, even before December’s events, public distrust of the president had reached a record 66 percent, up from 37 percent in 2011. A majority of South Africans believe Zuma ignores the courts and the parliament, according to an Afrobarometer poll released in November.

Municipal elections could be pivotal

The troubled economy and public distrust put in doubt whether the ANC can maintain its grip on power and whether Zuma will serve out his term.

The ANC has won 60 percent of the vote since coming to power with Nelson Mandela two decades ago.

Gary Van Staden, an analyst with NKC African Economics, said the party could lose as much as 10 percentage points of support in local elections between May and August. He said the ANC can expect to lose control in some municipalities, which run parks, libraries, utilities and sanitation.

If the elections go badly for the ANC, some analysts predict the party will try to replace Zuma.

“We look for a cornered ANC machine having the possibility of managing the exit of President Zuma around July,” said Peter Attard Montalto, an analyst at Nomura.

For now, however, the ANC has voiced support for the embattled president. In the annual speech on the January 8 anniversary of the party, Zuma touted the progress the ANC has brought to the country and said the ANC was needed as a unifier.