South African unemployment still more than one in four 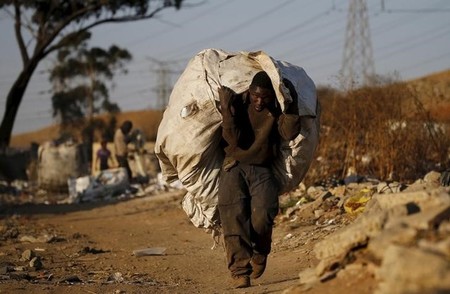 A quarterly labour force survey published by the statistics office on Thursday showed a small decline in the jobless rate from 26.7 percent in the first quarter.

Statistics South Africa said that equated to 5.634 million people compared with 5.723 million who were out of work in the January-March quarter. Unemployment is now the largest driver of poverty in South Africa, the statistics office said.

“Indications are that we are in a quite difficult economic situation,” said Statistician-General Pali Lehohla. “There are a huge number of job losses.”

Africa’s most advanced economy — though no longer its biggest — is on the brink of recession after contracting 1.2 percent in the first quarter as manufacturing and mining activity shrank.

“We didn’t expect much of an improvement in employment given the weak business and consumer confidence lately. A recession is still very likely.”

Under an expanded definition of unemployment which includes people who have stopped looking for work, the jobless rate rose to 36.4 percent in the second quarter, from 36.3 percent in the first three months of 2016, Statistics South Africa said.

The largest quarterly employment losses were seen in the public administration and social services sector, where 127,000 jobs were shed. Some 44,000 jobs were lost in agriculture due to a decline in the growing of crops and animal husbandry, with significant losses also seen in the transport sector.

“The high rate of unemployment contributes to much of the social tension and anguish experienced in South Africa on a daily basis, especially among the youth,” Stanlib chief economist Kevin Lings said.

South Africa’s financial hub of Gauteng, which includes the city of Johannesburg and the capital Pretoria, both set to be hotly contested in upcoming elections, had the country’s second-highest rate of unemployment at 29.5 percent.