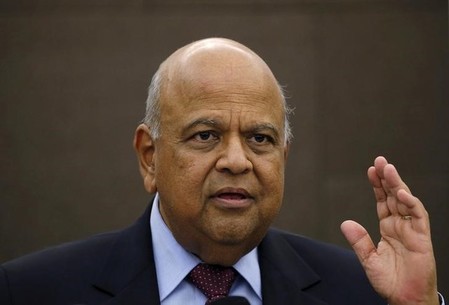 But he said that South Africa’s government must stick to its fiscal targets in the next five months and could not risk any pressure on the budget from debt-ridden state firms.

South Africa has also dodged cuts from Moody’s and S&P, but analysts said that downgrades could be in the pipeline by December amid an economic meltdown critics partly blame on mismanagement by President Jacob Zuma.

Speaking at a business forum, Gordhan said he had nothing to hide or worry about in relation to an investigation into a surveillance unit formed at the South African Revenue Service (SARS)‚ when he was its commissioner between 1999 and 2009.

“Confidence plays a big part in whether we get investments going and business activity going in our country,” Gordhan said at online publication Daily Maverick’s “The Gathering”, a forum also addressed by a cross-section of political leaders.

“Confidence is also about building trust and building understanding and having a shared idea of where we want to take this country.”

Zuma rattled investors in December by changing finance minister twice in less than a week, triggering a run on the rand and bonds.

To calm markets, the president reappointed Gordhan to the post he held from 2009 to 2014.

An investigation by the elite police unit Hawks into the surveillance unit at SARS has however led to speculation that Gordhan does not enjoy Zuma’s political support. On Friday Gordhan said Zuma and the ruling African National Congress had issued statements assuring him and the National Treasury of their support, but hinted that it would not be easy to rebuild dented confidence in South Africa.

Gordhan’s comments did little to cheer the rand, which fell more than 2.1 percent against the dollar on Friday in what traders and analysts said was partly a correction after rallying to five week highs following the Fitch review.

Gordhan stressed the need to put policies in place that would support sectors like mining and boost the economy, which Treasury estimates would grow at most by 0.9 percent in 2016.

Data from the statistics agency this week showed GDP contracted by 1.2 percent in the first quarter, mainly due to an 18-percent slide in mining during the quarter.

“We need to stabilise sectors of the economy that find themselves in trouble, like mining,” Gordhan said.