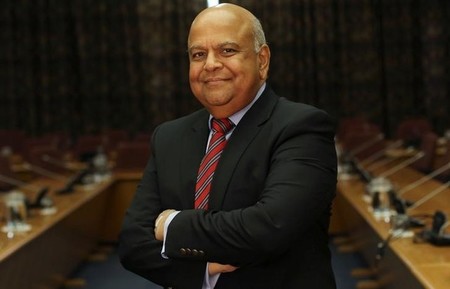 JOHANNESBURG (Reuters) – South Africa’s Finance Minister Pravin Gordhan faces a tough balancing act on Wednesday when he announces a midterm budget meant to boost the sickly economy and show his fraud case is not distracting him.

Gordhan has said he plans to reduce government spending, raise taxes and cut the budget deficit to 3.2 percent of gross domestic product (GDP) in the 2016/17 fiscal year, from 3.9 percent in the previous year.

But closer on his horizon are a Nov. 2 court appearance on fraud charges that he has dismissed as politically motivated, and pressure to provide more subsidies for students who have staged violent protests to demand free university education.

Analysts say any fiscal slippage could trigger credit ratings cuts to “junk”, and see little room for manoeuvre in an economy the central bank expects to grow by 0.4 percent this year.

“There is currently no space to loosen fiscal policy, or do much expenditure switching, ahead of 2019 national election,” said Maya Senussi, senior emerging markets analyst at Roubini Global Economics.

“With the political machinations, it becomes difficult for Gordhan to put something on the table that says we are re-engineering the economy for a different path,” Investment Solutions chief economist Lesiba Mothata said.

Speaking in parliament on Tuesday, Zuma said that fraud charges against Gordhan were “a concern to all of us, including the investor community”, and that he had never discussed the case with the state prosecutor.

“As cabinet, we have expressed our full support of the minister while respecting the independence of law enforcement and prosecuting authorities,” he said.

The state prosecutor has said that Gordhan, in his previous role as head of the revenue service, cost the tax agency about 1.1 million rand by approving early retirement for a deputy commissioner in 2010 and re-hiring him as a consultant.

The outpouring of support for the minister, whom edgy financial markets see as a guarantor of stability, also reflects approval of Treasury’s commitment to rein in spending and cut debt, currently at 44.3 percent of gross domestic product.

But after losing much ground in August local government elections, including key urban centres, some in the ruling African National Congress (ANC) want him to loosen the purse strings to woo back voters before a 2019 national election.

The main Democratic Alliance party said it would hold a peaceful march to parliament on Wednesday to demand that Zuma’s government provide more funding for higher education.

A poll by Reuters last week showed economists expect Gordhan to now target a deficit of 3.4 percent of GDP.

The turmoil around the minister caused the rand to sink by 4 percent, but the currency has since recovered because of the support the minister has received.

Political analyst Daniel Silke said Gordhan had kept his political standing amid the fraud controversy by positioning himself as “the saviour of the national interest opposed to the forces of personal interest”.