South Africa’s Gordhan to appear in court over fraud charges 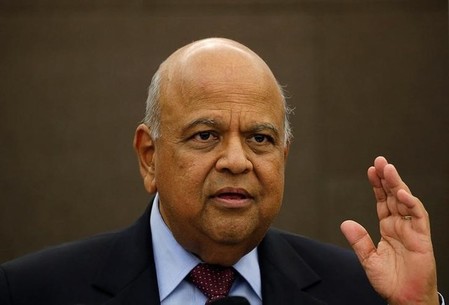 PRETORIA (Reuters) – South African prosecutors ordered Finance Minister Pravin Gordhan on Tuesday to appear in court on Nov. 2 to hear fraud charges against him, news that sent the rand and share prices reeling.

The rand dropped as much as 3.4 percent against the dollar amid fears Gordhan’s legal troubles could damage investor confidence in South Africa, where he has stood out as a reliable figure for financial markets against a backdrop of corruption.

The banking index fell as much as 5.12 percent, wiping 46.3 billion rand ($3.3 billion) off the market capitalisation of South Africa’s six biggest banks.

Prosecutor Shaun Abrahams said Gordhan, in his previous role as head of the South African Revenue Service (SARS), had cost the tax agency around 1.1 million rand ($79,000) by approving early retirement for tax agency deputy commissioner Ivan Pillay and re-hiring him as a consultant.

Gordhan was served a summons to attend a court hearing at which he would acknowledge the charges against him, as outlined in the summons, the National Prosecuting Authority (NPA) said.

It was not a plea hearing, the NPA told Reuters.

Gordhan said he would remain in his post despite the court summons. He has denied the allegations, saying they are part of a politically motivated campaign against him.

In a statement late on Tuesday, President Jacob Zuma reaffirmed his support for Gordhan, adding that the decision to prosecute him came at a sensitive time when the minister was successfully leading initiatives towards economic revival.

Perceived rifts between Gordhan and Zuma have previously rattled markets in Africa’s most industrialised economy, which faces the risk of ratings downgrades later this year.

Speaking to reporters, Abrahams said: “I can assure you there has been no political interference in this matter.”

Gordhan is already being investigated for his role in setting up a surveillance unit at the tax department a decade ago that is suspected of spying on politicians including Zuma.

He was first questioned about this in February by an elite police unit but in August ignored a police summons on the inquiry, saying he had done nothing wrong.

Analysts say Gordhan has urged fiscal prudence to appease ratings agencies while factions close to Zuma want to push through expensive projects. The president has denied any rift with Gordhan.

Gordhan confirmed prosecution officials had delivered the summons to appear in court to his house on Tuesday morning.

“It looks like we are in for a bit of excitement going forward,” he said at a business seminar in Johannesburg.

His lawyers later said in a statement Gordhan was seeking legal advice “to bring the matter to an expedited end.”

Gordhan’s political allies and opponents alike expressed concern over the impact a prosecution could have.

David Maynier, the shadow minister of finance for the main opposition Democratic Alliance party, said that prosecuting Gordhan would be “a disaster for the economy” and would make a credit ratings downgrade more likely.

The ruling African National Congress urged Gordhan to cooperate with the summons and said the lingering inquiry was having a detrimental effect on the economy. The ANC said it hoped the prosecutor’s latest move would bring the country “a step closer to uncovering the truth from facts” and resolve the saga.

South Africa’s Communist Party, a member of a ruling alliance with the ANC, said it was opposed to “political persecutions in any manifestation.”

Analysts said the Gordhan summons undermined the business climate in the country.

“This will further erode confidence in the political and economic management of South Africa,” Daniel Silke, director of Political Futures Consultancy, said. “It will potentially affect our chances of sustaining the current rating agency levels.”

Government and dollar bonds fell sharply, while the cost of insuring exposure to South African debt leapt to three-month highs.

Investors and rating agencies back Gordhan’s plans to rein in government spending in an economy that has been forecast by the central bank to grow at just above zero percent this year.

A cut to “junk” status in ratings reviews due later this year would have pushed up Pretoria’s borrowing costs, making it harder to plug the budget deficit.

But Cathy Powell, a public law lecturer at the University of Cape Town, said she believed Gordhan was likely to come away unscathed. “I am willing to lay quite a lot of money on a bet that Gordhan will be found not guilty and he could then possibly make a civil claim against the NPA for malicious prosecution.”