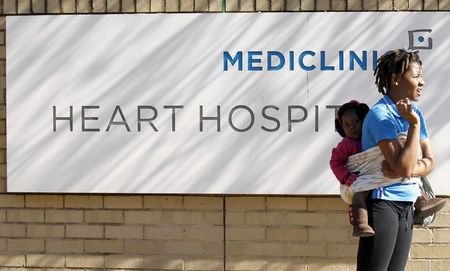 But NMC Health, already a major player in the UAE, vowed to fight on, saying on Wednesday it remained committed to a tie-up with Al Noor.

Shares in Al Noor jumped 19 percent to 1,185 pence, above the 1,160 pence value of Mediclinic’s agreed offer and valuing the company’s equity at 1.38 billion pounds ($2.12 billion), as investors anticipated a battle for the group.

Mediclinic’s Chief Executive Danie Meintjes, who will remain CEO after the deal, said the combined group would be the largest private healthcare provider by revenue in the “highly attractive growth market of the UAE”.

Mediclinic, which has more than 50 hospitals in South Africa and Namibia, also has a presence in the UAE. Combining the two companies will create an operator with around 20 percent of the private beds in the region, analysts said.

It will also be the biggest player in Switzerland, the third largest in South Africa, and will have a 29.9 percent stake in Britain’s Spire Healthcare Group.

The deal, structured as a reverse takeover of Al Noor by Mediclinic, will create a London-listed group with a turnover exceeding $4 billion operating 73 hospitals and 35 clinics.

NMC Health, which is also listed in London, said it had made an informal cash-and-shares offer to buy Al Noor on Oct. 9, days after Al Noor and Mediclinic said they were in talks.

Al Noor Chief Executive Ronald Lavater said there was a “compelling strategic fit” with Mediclinic, and together they could expand coverage and service delivery in the region.

He said the board had considered the NMC Health proposal and had concluded it was “inferior both on the value and on the deal certainty”.

The tie-up with Mediclinic is backed by the two major shareholders in Al Noor, Sheikh Mohammed Bin Butti Al Hamed and Kassem Alom, who combined hold 34.3 percent, the companies said.

NMC, however, was undeterred. “This confirms our belief in the competitiveness of our initial possible offer and that the combination of NMC and Al Noor has the strongest strategic and financial rationale for all stakeholders,” it said.

Al Noor was advised by Rothschild, Goldman Sachs and Jefferies, while Morgan Stanley and Rand Merchant Bank worked for Mediclinic.