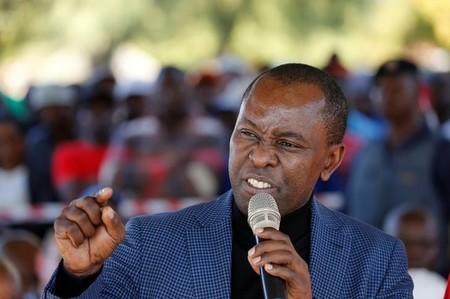 “I wish that everybody can negotiate with cool heads and avoid a strike and speedily resolve these negotiations,” he told reporters at a Sibanye Gold mine.

Talks between unions and the mining companies started this week.

The Association of Mineworkers and Construction Union (AMCU), the biggest union in the sector, is demanding pay hikes of more than 50 percent, while a smaller union, the National Union of Mineworkers, is seeking a 20 percent increase.

The demands are well above inflation at 6.1 percent. Africa’s most developed economy is struggling due to lower commodity prices and drought. The International Monetary Fund estimates almost zero growth this year.

South Africa has the biggest and most lucrative platinum reserves but labour unrest and regulatory uncertainty have dampened investor appeal.

The strike in 2014, which was led by AMCU, hit Anglo American Platinum , Impala Platinum and Lonmin, forcing them to cut jobs, sell mines and, in some cases, make cash calls to investors.