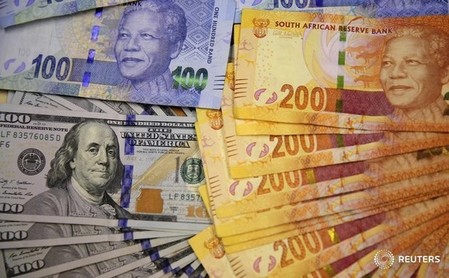 JOHANNESBURG (Reuters) – South Africa’s rand firmed to near three-week highs against the dollar and yields on government bonds fell on Monday after rating agencies Fitch and Moody’s affirmed the country’s investment-grade credit ratings.

Africa’s most industrialised country, which is expected to see economic growth of around 0.5 percent this year, has been trying to avert a sovereign rating downgrade to junk status that would raise borrowing costs and deter investment.

At 0809 GMT, the rand was at 13.8900 per dollar, a gain of 1.49 percent from its New York close on Friday. The currency was trading at its firmest levels since Nov. 10, according to Thomson Reuters data.

The yield for the benchmark government bond due in 2026 fell 21 basis points to 8.895 percent.

“The rand has had a gap open this morning which is likely due to the combination of a weaker dollar but also the positive news from the rating agencies,” Standard Bank chief currency trader Warrick Butler said in a note.

Focus was also on scandal-plagued President Jacob Zuma, who is facing a vote of no confidence by the ruling party’s executive committee.

“The market should be cautious about expecting too much, having been disappointed so often in the past,” Rand Merchant Bank analyst John Cairns said.

On the stock market, the Top-40 index was flat while the broader all-share inched up 0.1 percent in early trade.