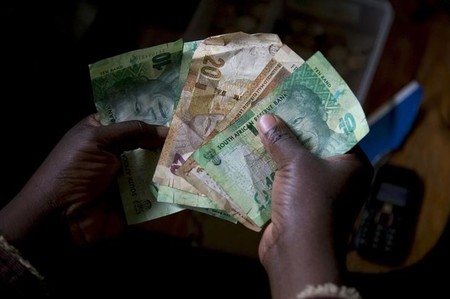 JOHANNESBURG (Reuters) – South Africa’s rand touched a nine-month high against the dollar and government bonds firmed on Thursday as the smooth running of local government elections and expectations that interest rates in leading economies will remain low boosted sentiment.

The yield for the benchmark government bond due in 2026 dipped 10.5 basis points to 8.55 percent.

“You can attribute some of the movements to the smooth running of the elections without any major incidence of violence or reports of cheating. On the day (the rand) is outperforming other emerging currencies against the dollar,” ETM market analyst Ricardo Da Camara said.

South Africans cast their votes in local elections on Wednesday and the opposition Democratic Alliance (DA) led in three major cities on Thursday as votes were counted, threatening to deal the biggest electoral blow to the African National Congress (ANC) since the end of apartheid two decades ago.

The ANC – which ended white-minority rule when it swept to power in the country’s first democratic elections in 1994 – held a big lead in the national count.

“It’s not entirely clear that the DA is good and the ANC is bad but the market generally welcomes more contested democracy,” Nomura analyst Peter Attard Montalto said.

Other traders said the rand also got support from investors seeking higher yields after the Bank of England cut interest rates for the first time since 2009 on Thursday, while near-term U.S. rate hike prospects cool.

On the bourse, stocks also gained with Sappi surging more than 7 percent after the paper maker reported an eight-fold jump in quarterly profit as of 1117 GMT.