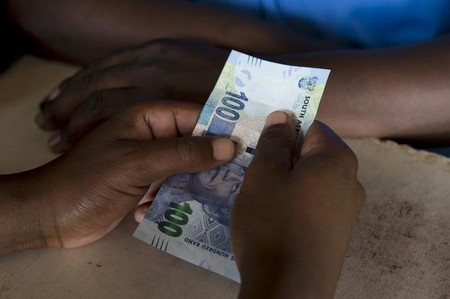 JOHANNESBURG (Reuters) – South Africa’s rand weakened against the dollar on Wednesday, in line with a pullback in commodity currencies as the global oil price fell one more.

Commodity-linked currencies such as the rand reversed the previous day’s gains as a recovery in crude oil prices stalled after a workers’ strike which had cut output ended in Kuwait.

The rand had touched a near five-month high of 14.1900 on Tuesday in the wake of improved global risk sentiment linked to better oil prices.

“Commodities are off their highs from yesterday and trade softer so far; this has seen the rand get back above 14.3500 with more resistance at 14.4000/4100 likely to attract offers first up,” said Standard Bank trader Oliver Alwar.

Traders and analysts said the rand could take further direction from domestic CPI data due out at 0800 GMT, with analysts polled by Reuters expecting the main year-on-year number to ease to 6.3 percent from 7 percent.

Government bonds also weakened, and the yield for the benchmark instrument due in 2026 rose 4 basis points to 8.925 percent.

The stock market looked set to open slightly down, with the