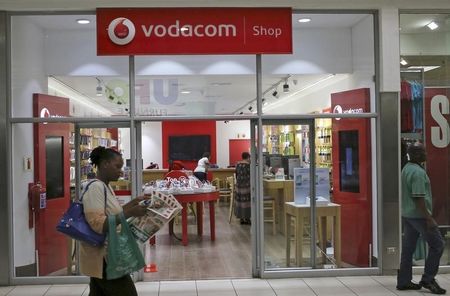 The South African unit of Britain’s Vodafone has spent billions to expand its network in recent years with a strong focus on providing faster internet to its customers as more of them get smartphones.

“We’re becoming more of a big data provider, an internet provider if you like,” Vodacom Group Chief Executive Shameel Joosub said in a conference call with reporters.

The company said headline earnings per share – the main profit measure in South Africa and strips out certain one-off items – rose to 440 cents from 415 cents, in the six months ended Sept. 30.

Data revenue was up 33.5 percent as Vodacom increased 4G coverage in its home market, the company said.

Customers that have access to 4G have increased to nearly 2 million in Africa’s most advanced economy and they use almost three times more data than those stuck with lower speeds, Joosub said in a statement released with the results.

The company is forming partnerships with content providers to get its customers to consume more videos and music on smart devices as it tries to rake in more data revenue.

“We need to play more in the content space,” Joosub said.

Vodacom’s smartphone users consume around 425 MB of data per month, compared to 2 GB in the U.S. and Britain which Joosub sees as an opportunity for growth.