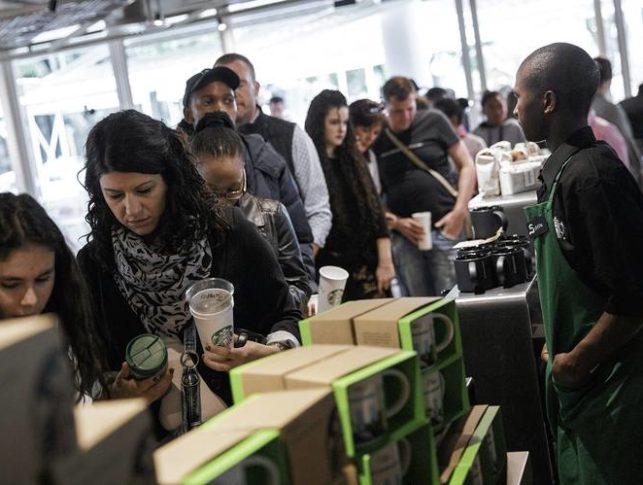 Hundreds in Johannesburg line up on opening day of the coffee giant’s first store in sub-Saharan Africa.

The U.S. coffee giant Starbucks opened its first cafe in sub-Saharan Africa – a store in an affluent Johannesburg suburb – and the company plans to open at least a dozen more stores South Africa in the next two years.

Many people waited overnight and hundreds of people lined up before the opening to get their first taste of Starbucks while #StarbucksSA trended on Twitter on opening day.

Previously, Starbuck’s only African locations were in Morocco and Egypt. The global corporation has about 23,000 stores in the Americas, Europe and Asia.

Starbucks founder Howard Schultz said the company might eventually open as many as 150 stores in South Africa.

A second location is set to open soon at another Johannesburg shopping mall, but there are no plans to expand to other countries in the region.

The new stores are being launched through a licensing partnership between Starbucks Coffee Company and Taste Holdings, a South African management group and leading licensor of international brands.

“We are proud to be bringing Starbucks to South Africa,” said Kris Engskov, president of Starbucks for Europe, Africa and the Middle East. “We’re going to deliver a great Starbucks experience. The coffee market here (in South Africa) is vibrant and growing fast – we want to be part of that growth.”

Under the agreement, Taste Holdings gains exclusive rights to open Starbucks outlets in South Africa. It will own and operate the stores.

Carl Gonzaga, chief executive officer of Taste Holdings, said the partnership is committed to development of local suppliers and Taste Holdings has a program to increase employment among unemployed South Africans, who will benefit from new opportunities at Starbucks.

Engskov said young people have been the key to Starbucks’ success. With most of its workers aged 17 to 25 years old, “talented youth has always been a priority,” he said.

Hundreds line up for coffee A line at the new Starbucks location in Johannesburg

At the April 21 Starbucks opening in Johannesburg’s Rosebank district, a long line of customers was waiting when the store opened at 7:30 a.m.

“Starbucks has been one of the things missing from the South African scene,” said Norma Cooper, a bank employee.

Gonzaga said the menu was designed to reflect local customer tastes including local products such as Rooibos tea.

Some of the coffee beans are sourced from nine African countries, including Kenya and Burundi, he said.

With the most developed economy on the continent, South Africa has seen recent openings of several U.S. food chains, including Krispy Kreme Doughnut and Burger King.

The support centers opened after Ethiopia and the company settled a dispute in which that nation and Oxfam accused Starbucks of trying to block Ethiopia from obtaining trademarks for two of the country’s best-known coffee beans – Harrar and Sidamo. A third coffee, Yirgacheffe, was trademarked in the U.S. in 2006.

Under the agreement, Starbucks was allowed to promote and sell the three brands in markets where they are trademarked as well as where they are not while recognizing the integrity of the Ethiopian coffee brands.