Strike over pay at South African Airways grounds over 30 flights 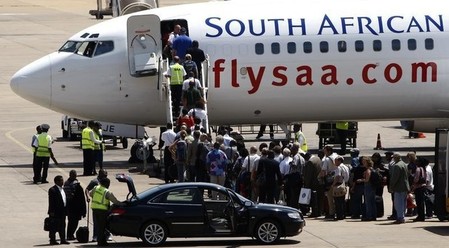 JOHANNESBURG (Reuters) – South Africa’s state-owned airline South African Airways cancelled at least 32 flights on Wednesday and has said that number could grow because of a cabin crew strike.

Cabin crew at SAA went on strike in early hours of Wednesday over pay, the main union at the state-owned carrier said, disrupting domestic flights and international flights.

Twenty eight of the flights cancelled were destined for domestic destinations within South Africa, while the rest were external flights, a South African Airways (SAA) official said.

The carrier also said some flights had been delayed.

“We’re talking about a substantial amount of revenue that has been lost in only half a day,” SAA spokesman Tlali Tlali said in a video posted on the eNCA television channel’s Twitter feed.

“We’re hoping to get labour to sit down with us … so we can get everyone back to work, so that in the evening we are able to operate our international and regional flights,” Tlali said.

SAA said the strike had delayed flights out of O.R. Tambo Airport in Johannesburg, which handles around 19 million passengers a year, and would also affect flights from its coastal airports.

Zazi Nsibanyoni-Anyiam, president of the SACCA union, told Reuters that the workers, who represent around 80 percent of SAA’s cabin crew, had not received pay increases for six years.

“We will be here until the company puts an offer on the table. We think what we are asking for is reasonable,” Nsibanyoni-Anyiam said from a picket outside O.R. Tambo Airport.

SAA, which is technically insolvent and reliant on government debt guarantees of almost 20 billion rand ($1.52 billion), has been singled out by rating agencies as a threat to the country’s credit status, which was recently downgraded to “junk” by two of the big-three ratings agencies.