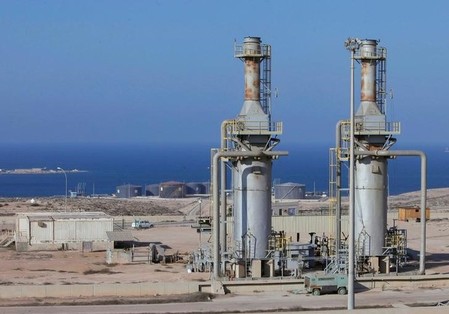 19 May 2016 Comments (0) Business, Latest Updates from Reuters, Middle East  Like

BENGHAZI, Libya (Reuters) – A tanker that had been blocked for three weeks in a stand-off over oil exports at the eastern Libyan port of Marsa al-Hariga entered the port and began loading on Thursday, officials said.

The Seachance, which had been waiting to load oil for Glencore on behalf of the Tripoli-based National Oil Corporation (NOC), was loading 600,000 barrels for shipment to Britain, port and oil officials said.

Exports from Hariga have been blocked since early this month due to a dispute between competing eastern and western branches of the NOC.

The blockage reduced production from the eastern Messla and Sarir fields, lowering Libya’s output to around 200,000 barrels per day (bpd), a fraction of the 1.6 million bpd the OPEC member country was producing before the toppling of leader Muammar Gaddafi in 2011.

The heads of the two NOC branches reached an agreement in principle to resume shipments at talks held in Vienna last weekend, but details of the deal were not made public.

If further shipments are allowed to leave Hariga Libya could quickly raise its output to more than 300,000 bpd.

The Messla and Sarir fields were previously producing more than 200,000 bpd, though Omran al-Zwai, a spokesman for eastern NOC subsidiary AGOCO, said the company needed a budget for new equipment to ensure maximum production.

The oil dispute is tied up in the broader conflict between rival political and armed factions in Libya. The NOC in Tripoli is working with a new U.N.-backed unity government to try to revive oil production, but its rivals in the east tried last month to export a tanker of oil independently.

After the tanker was blacklisted and forced to return to a western Libyan port, the eastern NOC prevented the Seachance from loading at Hariga.

Oil trader Glencore, which had been exporting crude oil from the port under a deal reached late last year, on Thursday declined to comment.

In the past three years a combination of labour disputes, factional rivalries and security threats have shut down some of Libya’s key oil fields and facilities.

But the eastern ports of Hariga and Brega have continued to operate. On Wednesday a tanker loaded 600,000 barrels of oil at Brega for shipment to Italy, a port official said.