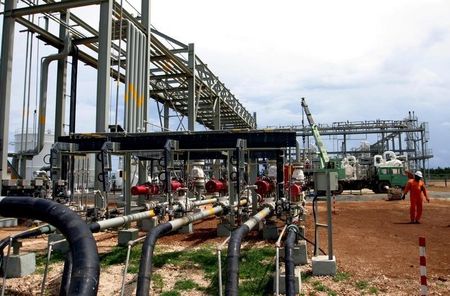 DAR ES SALAAM (Reuters) – Tanzania said on Friday it had finalised a land acquisition for the site of a planned liquefied natural gas (LNG) plant and was now working to compensate and resettle villagers to move forward on a long-delayed project.

Tanzania’s natural gas reserves are estimated at more than 55 trillion cubic feet (tcf) and the central bank believes 2 percentage points would be added to annual economic growth of 7 percent simply by starting work on the huge plant that would draw in billions of dollars of investment.

BG Group, being acquired by Royal Dutch Shell, along with Statoil, Exxon Mobil and Ophir Energy plan to build the onshore LNG export terminal in partnership with the state-run Tanzania Petroleum Development Corporation (TPDC). They aim to start it up in the early 2020s.

But their final investment decision has in part been held up by delays in finalising issues related to the site.

“After securing the title deed, the law requires the owner to pay compensation to the relevant parties based on a valuation done by the chief government valuer,” TPDC said in a statement.

TPDC now owns title deed for some 2,071.705 hectares of land that have been set aside for the construction of the planned two-train LNG terminal at Likong’o village in the southern Tanzanian town of Lindi, which is located close to large offshore gas finds.

Another 17,000 hectares of land around the site for the proposed LNG terminal has been allocated for an industrial park.

The land was bought from large landowners and some individual villagers.

Tanzania’s new president, John Magufuli, has promised more urgency in decision-making, responding to a frequent complaint from businesses. One example has been delays in finalising a site for the multi-billion dollar LNG plant that will exploit huge offshore gas finds.

Oil companies were unable to gain access to the site until the land purchase, analysts say.

“The next key thing to watch is how quickly a host government agreement is executed between the Tanzanian government, TPDC and IOCs (international oil companies),” Ahmed Salim, senior associate at consultancy Teneo Intelligence, said in a note to clients.

East Africa is a new hotspot in hydrocarbon exploration after substantial deposits of crude oil were found in Uganda and major gas reserves discovered in Tanzania and Mozambique.

Mozambique’s plans to build an LNG plant have moved more swiftly. With other LNG projects moving ahead around the world, the best deals for long term gas sales contracts will likely be secured by those who come on stream first, analysts say.