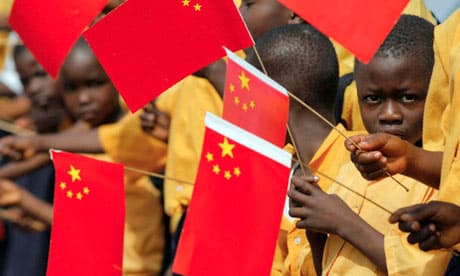 For South Africa, the financial consequences were particularly devastating. South Africa is the only country in the world traded on the “carry-trade”. The carry trade is a money market where currency and foreign exchange brokers determine the value of each country’s currency by looking at the nature of each economy, its strengths and potential changes. As China’s yuan plummeted in value, so did the South African rand: China imports a significant amount of South Africa’s exports, and as the demand for the luxury goods produced in South Africa, such as gold and platinum, falls as result of China’s reduced purchasing power, the South African rand lost nearly 8% of its value within a week of China’s crash. The rand is one of the most traded developing country currencies, which increases its vulnerability—as it is worth less against the dollar, the demand for rand in the currency exchange will undoubtedly fall. The leaders of China and Angola shake hands.

It is understood that China has negotiated a favourable trade-exchange to purchase oil cheaply from Angola and, in exchange, China has provided loans to Angola’s national oil company. As support for Angola’s oil industry falters after the brutal collapse of global oil prices, Angola’s economy is looking fragile. In July of this year, Angola’s cabinet sent a revised budget (with the assumed oil price at $40 per barrel, nearly half what had been previously projected) to parliament that outlined the country’s bleak forecast for 2015: key infrastructure projects would be shelved, enormous chunks of social spending would be dropped, and the government’s budget will be slashed by nearly $15 billion for the coming year. This all occurred before China’s crash.

China imports 61% of all of Angola’s exports, and Angola imports 21% of its imported goods from China. As Angola’s economy shrinks and China’s buying power decreases, it is almost certain that Angola will suffer serious consequences toits oil-based economy.

China is invested in Zambia’s resource-extraction sector, particularly for minerals used in manufacturing technology. Many of the firms operating in Zambia are controlled by Beijing or are strongly supported by the Chinese state, giving them an edge over local competitors.

Zambia is home to a large Chinese expat community, who have built successful businesses that employ a large number of Zambians, particularly in the retail and construction industries. It is not known whether these expats receive subsidies from China, but if they do, it is likely that this support will be reduced. Zambia has a reported unemployment rate of 15% (CIA World Factbook, 2008), down from 50% in 2000. Should these Chinese business people close up shop and return home, it would have potentially devastating effects upon Zambian employment rates.

Sierra Leone has received billions in development aid from China, of which it has repaid almost none. As China’s economy shrinks, it is highly unlikely they will continue to prop up Sierra Leone’s economy. 53% of Sierra Leone’s exports go to China, and 14% of its imports come from China, making it Sierra Leon’s biggest trading partner. Since African commodities are priced in US dollars, China’s ability to purchase Sierra Leonean goods will likely falter, thus compounding the damage to its already struggling economy.

The future for Chinese involvement in African economies is unsure. For the many African nations that receive substantial development aid and investment from China, this could mean disaster. With resource-based economies, many of these African economies may stagnate. This is an opportunity for their governments to seriously discuss possibilities for diversification.