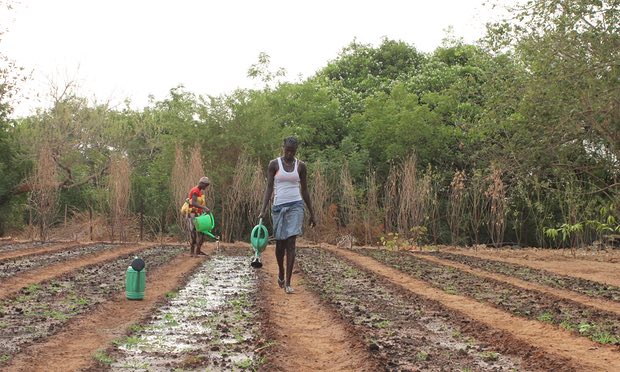 Many of Gambia’s young people are leaving. Packing their things with what little they have, and making a perilous journey across the Sahara Desert to Libya and from there, across the Mediterranean Sea to Europe. Tida Jallow, a Gambian seamstress and fashion designer is part of an initiative to curb the mass exodus before Gambia loses all its young people.

Nicknamed the ‘Back Way’ this popular route to Europe is tried by many Africans who have no chance of obtaining a visa and leaving through official means. According to the BBC, Gambia, with a population of less than two million, by percentage of population, accounts for more people heading to Europe than any other nation. With Europe, worried about over-migration, in Gambia it is the opposite that worries people. With so many young able bodied people leaving for greener pastures, there is no one to help out on the farms and bring in the harvests in the villages.

Where an average daily income is $1.25, it is not surprising that people dream of a better life. In a country where the cell phone network is better than any local infrastructure, almost everyone can surf the web via their phone. Social media photos of friends and relatives in Europe decked out in designer brands only add to the incentives to leave. Families whose relatives send back money, have corrugated roofs and satellite dishes on their new houses.

No to the ‘Back Way’

In an effort to give people a reason to stay in Gambia, Jallow trains villagers the art of tailoring in her boutique in western Gambia. Even so, four of her apprentices have already left for the ‘Back Way,’ including her half-brother. Even in Jallow’s tiny village, around 50 people have taken the ‘Back Way. People understand the risks, says Jallow. They have all heard stories about dying in the Sahara or drowning at sea, yet they continue to leave. There is also a risk of being kidnapped, trafficked raped and murdered. Jallow’s brother, who she trained as a salesman, died recently in Libya.

Chief Executive Officer of the Anti-Back Way Campaign, Mustapha Manneh trains youth people to gain agriculture and farming skills. “People always think life will be better in Europe,” he says. “Speaking personally though, I wouldn’t want to be an illegal migrant anywhere.” Mr Mannah points out that many youth people leaving the country dramatically lack skills. His organisation will pay a visit to schools in order to make them aware of the many dangers of taking the ‘Back Way’. Young people are vital to the development of Gambia, but more job opportunities are needed to keep them from leaving the country.

Ruled for more than two decades by President Yahyah Jammeh, a man accused of killing and jailing his critics, many Gambians claimed political asylum upon reaching Europe. Although it is understood that many genuinely left for economic reasons. With the arrival of a new president however, Gambia’s economy may take a turn for the better. Adama Barrow won the election in December 2016, by 50,000 votes. After some back-peddling by former President Jammeh, Barrow was sworn in and promises to revive the economy.

Barrow himself, left for Europe as a young man, and understands the pull for young people to leave Gambia. “You hear the name Europe, you think it’s heaven. It’s never like that,” he said. After working as a security guard for three years in London, Barrow returned to Gambia in 2006. He then set up a successful real-estate agency before being elected President of Gambia. A story that shows there may be some more hope for Gambians willing to stay after all.