U.S. and Africa: From aid to trade 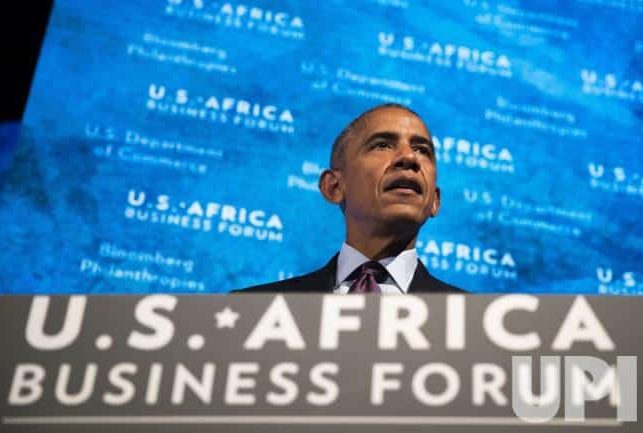 U.S companies are just “scratching the surface” of business opportunity in Africa, effectively leaving an expanding market wide open for China, according to advocates for boosting trade, including President Barack Obama. Dismissing the economic slowdown of some African nations as temporary, experts at the second U.S.-Africa Business Forum pointed to the potential offered by an expanding middle class, untapped mineral wealth and expanses of uncultivated farmable land on the continent. Among those urging more trade between the United States and Africa was President Obama, who spoke to the forum in New York on Sept. 21. “We are making progress but we are just scratching the surface,” Obama said. “There is still so much untapped potential.”

Obama and others pointed to significant growth in trade between the United States and Africa. But experts noted that economic activity is tiny as a share of total trade on either side. Sub-Saharan Africa accounted for only one percent of all U.S. trade in 2015. While 5.6 percent of Africa’s trade was with the United States, that amount is much smaller than the more than 19 percent of the continent’s trade with China, which has stepped up economic ties with Africa in recent years. According to the Obama administration, American and African countries have made deals worth $15 billion since the first U.S.-Africa Business Forum two years ago. Another $9 billion in deals were announced at the forum.

American investment in Africa grew by 70 percent with major companies including Google and FedEx increasing their presence on the continent. African nations, meanwhile, have encouraged increased trade and business development by cutting red tape and promoting political stability. The Obama administration has pushed initiatives to double access to power and offer preferential trade terms in order to help the continent develop its manufacturing and agricultural sectors.

Obama said infrastructure will power the economies of African in the future, especially increasing access to electrical power for two-thirds of sub-Saharan Africans who lack access today. Besides the extension of trade accords with Africa and its Power Africa program to boost electricity supplies, the U.S. increased support from the U.S. Export-Import Bank, the U.S. Trade and Development Agency, the Overseas Private Investment Corp. and the Millennium Challenge Corp.

For its part, Africa is working hard to ease barriers to trade and investment through development of regional free-trade accords and political stability, according to Nkosazana Dlamini-Zuma, chairwoman of the African Union Commission. Still, there is more to be done as Africa seeks to recover from an economic slowdown prompted by falling oil and commodity prices as well as a drop in demand from China, which has its own economic struggles. The International Monetary fund recently forecast that sub-Saharan Africa’s economy would expand by only 1.6 percent this year, about half the growth rate of 3.3 percent in 2015 and well below the annual average of 5.7 percent in the 10 years before that.

However, the averages for the continent do not tell the whole story. While South Africa and Nigeria, the two largest economies in the sub-Sahara, are struggling, several nations, including Kenya, Rwanda, Tanzania, Ivory Coast and Senegal, are expected to experience economic growth well over 5 percent this year. At the same time, a growing population and increased consumption pose opportunity for businesses that gain a foothold on the continent. Household consumption in Africa is expected to grow 3.8 percent annually until 2025 when it will reach $2.1 trillion, according to McKinsey & Co. It projected that the continent will have a bigger workforce than India or China by 2034.

Amadou Sy, director of the Brookings Institution’s Africa Growth Initiative, said U.S. companies have been slow to shift from seeing the continent as an aid recipient to seeing it as a potential business partner. While aid has long been the primary focus of dealings with Africa, that is changing Sy said. ‘’The other side of the coin is that we have fast-growing economies. We have business opportunities,” he said. “The first accomplishment is getting U.S. businesses and U.S. stakeholders to look at Africa as a business partner.”

Like Africa, Economy, Featured U.S. and Africa: From aid to trade