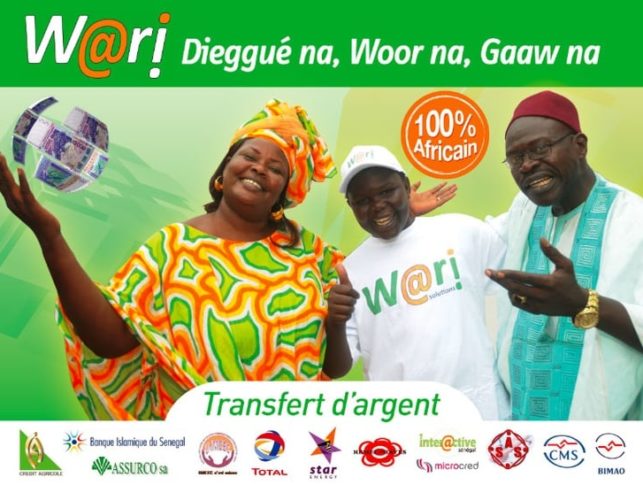 The money transferring business Wari has become Senegal’s first choice as it continues to expand into other countries.

Wari might not be a familiar name to people outside of Senegal, but the money transferring system is almost synonymous with sending money in the country of its creation. In fact, Wari is so widely used that in Wolof (the country’s most widely spoken language), the phrase “Warima ko” means “send me money”.

Wari’s main rival in the world of money transferring was the international company Western Union, but Wari now holds 80% of the market in Senegal and the company is growing at a staggering 35% per month.

How it works and why it’s winning

The Wari system is fairly straightforward. A person pays money into one of the multitude of Wari outlets and an SMS is sent to the person they are sending the money to. The person who receives the message then takes their ID and the code they were sent to their nearest outlet and withdraws the cash. By partnering with 45 different banks and 17 African post offices, Wari has ensured that members of the public are never far from a place where they can make and receive a payment.

In addition to this coverage, Wari is commission free and very low cost, which is something that hugely encourages poorer people to feel comfortable using it. In a country like Senegal, being able to provide people with an easy and affordable way to send and receive money is a major selling point as 94% of the population does not have bank accounts. A cash-dominated culture, in which many people are quite poor, makes transfer networks almost essential.

Wari has ensured its status as the first choice by a combination of low costs, ease of use and availability. There are 45,000 points of sale across 26 nations and 2,000 of these are in Senegal, where the company processes around 65,000 transactions per day! The parent company behind Wari is Cellular Systems International, established in 2008 by CEO Kabirou Mbodje. Mbodje’s local knowledge and understanding of his own nation’s culture and needs allowed CSI to launch Wari and rapidly gain traction in the market. But aware that the needs and attitudes in other African markets will differ, Mbodje has adopted a sensible strategy toward expansion.

Mbodje has said that, “Wari was designed by Africans with a vision to go global” and yet going global always involves adapting. Mbodje was self-aware enough to recognize that without the same local knowledge that had helped conquer Senegal, Wari needed to work in conjunction with other companies to be successful in new markets.

As such, Wari has built partnership deals with numerous businesses and organizations in any new country in which they launch. Wari provides the technology to companies who understand local needs but do not have the means to deliver all these services.

From NGO’s to gas stations, Wari has carefully constructed a network of partners within nations like Tanzania, Morocco and Gabon.

The result of such localized deals is that Wari is processing an average of 40 million transactions monthly and the majority of these are outside of the initial Senegalese market.

Despite, what is ostensibly a huge success story, the CEO of CSI and the Wari brand is very measured in his appraisal of his company’s growth. When interviewed by New African Magazine, Mbodje said, “I think I will call my business a success when I am able to serve all of Africa as one entity, giving everybody, everywhere access to…pensions, life insurance… health care, these kinds of things.”

These are hugely ambitious plans but the first steps have already been made. Last year, Wari launched project Services Relay Points that offers citizens services ranging from remote medicine to bill payments. A percentage of revenues are donated to local groups providing healthcare and educational facilities. Launched in Senegal, it has now also been rolled out to Mali and Mbodje sees it as the start of his grand plan.

It is something that Mbodje believes in strongly and it aims to also change the way the continent is viewed from outside. He has previously stated, “Africa doesn’t need aid or loans, but organization.” It will be interesting to see just how far Wari can go in bringing about such change.