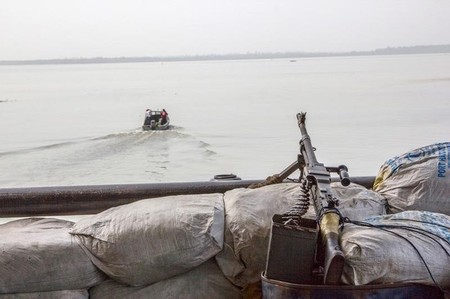 LONDON (Reuters) – Pirate gangs in West Africa are switching to kidnapping sailors and demanding ransom rather than stealing oil cargoes as low oil prices have made crude harder to sell and less profitable, shipping officials said on Tuesday.

Attacks in the Gulf of Guinea – a significant source of oil, cocoa and metals for world markets – have become less frequent partly due to improved patrolling but also to lower oil prices, according to an annual report from the U.S. foundation Oceans Beyond Piracy (OBP), which is backed by the shipping industry.

“They have had to move towards a faster model and that faster model is kidnappings,” OBP’s Matthew Walje said, noting that ransom payouts were as high as $400,000 in one incident.

“It only takes a few hours as opposed to several days to conduct the crime itself,” he told Reuters at the report’s launch in London. “Fuel prices have fallen, which cuts into their bottom line.”

OBP said violence had also risen, including mock executions, and last year 23 people were killed by pirates there.

“A lot of people are dying from piracy – nowhere near that number died in the last few years in the Western Indian Ocean (due to Somali piracy),” Giles Noakes, of leading ship industry body BIMCO, told the briefing.

“We are particularly concerned by the issue,” said Noakes, whose association audits the OBP’s annual report.

Analysts say the pirates have emerged from Nigerian militant groups such as the Movement for the Emancipation of the Niger Delta and OBP’s Walje said a growing problem was the splintered nature of the various gangs operating in West Africa.

“It is more fractured than it would be off Somalia where there were a few major gangs and kingpins operating,” he said.