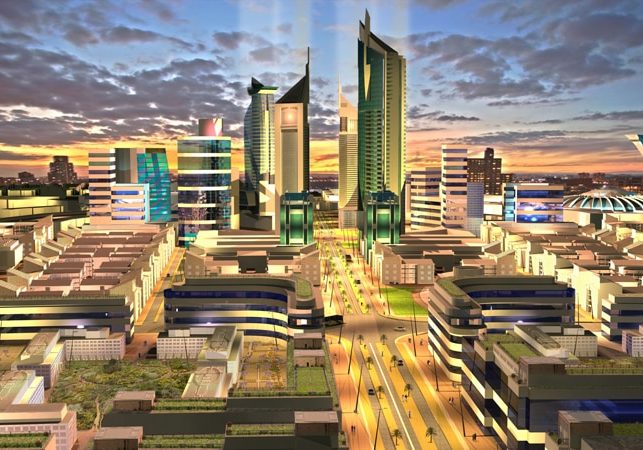 The construction of Kenya’s Konza City has begun, but will the city of the future fulfill its designers’ grand dreams?

When Kenya announced the hugely ambitious Konza City project in 2008, it was seen by most as a statement of intent by the President Mwai Kibaki. While the president is no longer in power, his dream of creating a tech-based city of the future, which would create a wealth of jobs, has remained at the forefront of Kenya’s Vision 2030 project.

The project aims to develop a strong, adaptive economy that turns Kenya into the leading tech nation within Africa. Konza City is to be the jewel in the crown of the project, and a city quite unlike anything seen on the continent before.

The main goal of the Konza City project is to revolutionize Kenya’s economy in terms of how it is structured, and how it develops throughout the 21st century. Kenya is one of Africa’s largest economies, with a GDP of $65.89 billion in 2015, yet up until 2013 75% of national assets were still in agriculture. As economies evolve, it is common for a shift into less production based means, and for a nation with Kenya’s climate it makes sense to redirect assets into areas that do not rely on uncontrollable forces of nature.

With Nairobi already a blossoming tech hub, the Kenyan government wants to create a designer city that both entices foreign investment and fosters local talent. Konza is to house 1,500 students and have an additional 35,000 homes for people working across its offices and research centers. The “Silicon Savannah,” as it has been dubbed, aims to be a hotspot of tech startups, and a regional base for global giants such as Google, Samsung and IBM.

What made the Konza City idea so bold was that this was not to be a glorified office space, but a genuine city with homes, schools and families being raised there. A bustling metropolis, built from scratch, is unprecedented as a feat of engineering and marketing, so unsurprisingly there have been obstacles.

The site of the future city

Concerns over infrastructure and timing

The biggest worry for potential investors has been whether this new city can guarantee the everyday essentials that allow a place to run. The utilities that most of us take for granted – water, electricity and transport – are vital for a city to function.

Hamish Govani, Chairman of Kenya Association of Property Developers, voiced his concerns over power reliability earlier this year, saying, “By the time we come in to begin developments, we want to have guarantee of world-class infrastructure. We have big multinationals looking to set foot at Konza, we need proof that we will not be let down.”

The very same concerns were expressed by a project assistant for the Delegation of German Industry and Commerce in Kenya, Mr Thilo Gabriel Vogeler, who is interested in investing but said, “Since frequent power blackouts are a common occurrence in Nairobi, I would like to know how they will ensure reliability and constant supply 60km away.”

Other doubters have felt that construction would not begin in the time delineated under the plan, and it would therefore become an economic burden. However, the government has moved to silence such concerns by beginning the ground breaking for the first plots of land last month.

It appears that the Konza City project is truly beginning to move.

Konza Technology City Development Authority (KoTDA) CEO Eng John Tanui told reporters earlier this year that the first parcels of land are ready for investment now and that “we are completing the design for the provision of utilities including waste water management, street lighting, water, power and Internet systems to ensure that these are laid out in the right way.”

The project has interest from Blackberry, IBM, Google and many other multinational companies, but it is also ensuring that locals have an opportunity to invest and become part of something unique. ICT Cabinet Secretary Fred Matiang’i spoke at a news conference in October last year saying, “Together with the National Treasury, I am working on a Public Private Partnership framework that will see government source for funds to support local investors.”

If the project is a success, then 200,000 jobs could be created by 2030, and by 2018 the city aims to account for 2% of Kenyan GDP. With groundbreaking for construction already underway, investors from far and wide will be watching with interest, to see if the Konza City dream becomes a prosperous reality.