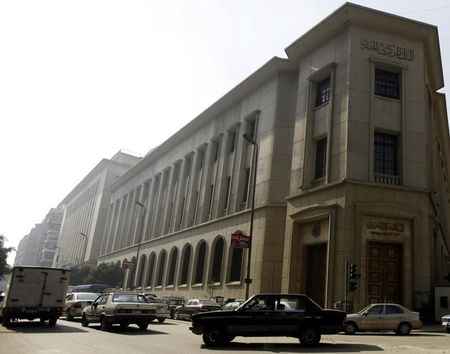 CAIRO (Reuters) – Egypt’s central bank revised the way it allocates dollars at auctions, seeking on Tuesday to reassure markets by repaying foreign investors a backlog of more than $500 million built up during a long-running dollar shortage.

The economy has been in disarray since the 2011 uprising that ended Hosni Mubarak’s 30-year rule, spooking foreign investors and tourists who are the main sources of foreign currency.

Foreign currency reserves have dropped from $36 billion before the revolt to about $16.4 billion in October, leaving the central bank with little firepower to protect the value of the tightly-managed Egyptian pound.

In February, the central bank limited the amount of dollars companies could deposit in banks to squeeze a dollar black market.

Business people say that policy backfired, making it difficult for companies to finance imports and discouraging foreign investors who feared they would be unable to repatriate profits or cash in their investments.

In the first major move by Egypt’s new governor Tarek Amer, who took up his post on Friday, the central bank said it had repaid foreign portfolio investors $547.2 million, clearing the entire backlog.

“This is a very strong signal about the change in management ideology,” said Hany Farahat, senior economist at CI Capital.

“There has not been an indication of where such sources of funding have come from… It might just be more aggressive use of the reserves available at the bank.”

The central bank urged foreign investors to enter Egyptian capital markets through a pre-existing scheme set up to help them repatriate their hard currency.

Those who have used the scheme have not faced delays, the central bank said in a statement. But many foreigners have invested without using that mechanism and had struggled — until Tuesday — to obtain dollars and move them out of Egypt.

The measure is the latest in a series taken by the central bank since Amer’s appointment was announced in late October.

Within two weeks of the announcement, banks had supplied $1.8 billion to clear a backlog of imports that had caused an outcry among businesses.

Amer’s next move came on Nov. 11, when the central bank supplied $1 billion to banks to cover 25 percent of dollar overdrafts they had opened for companies during the crisis.

Mohamed El Sewedy, the head of the Federation of Egyptian Industries, told Reuters in a recent interview Amer had promised to cover the entire $4 billion exposure.

At the same time, the central bank strengthened the pound by 20 piastres — a surprise move given the gap with the black market rate, now hovering about 8.5 pounds to the dollar.

The central bank held the pound steady at 7.7301 to the dollar at its second official dollar auction under Amer, but caused confusion by supplying some banks with more of their forex needs than usual and others with nothing at all.

Egypt’s central bank holds three foreign exchange auctions a week, and the sales are the key mechanism through which it sets the official exchange rate of the pound.

Banks are accustomed to receiving a regular quota of foreign exchange at each foreign currency sale.

Bankers said some banks had bid late in the auction due to uncertainty over whether the central bank would move the exchange rate or hold it steady and had missed out. Others said some banks who bid early in the session were also refused.

The central bank said it had changed the “internal allocation process” but gave no details on the changes or whether they would apply to future forex auctions.

Amer, the well-regarded former head of commercial lender National Bank of Egypt (NBE), faces a delicate balancing act as he seeks to end the foreign exchange pressure without triggering inflation, which hurts the poor hardest, or dampening the growth needed to create jobs for its growing population.