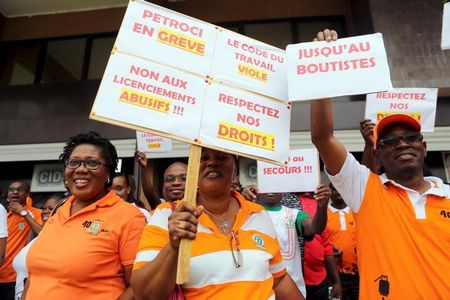 ABIDJAN (Reuters) – Workers at Ivory Coast’s state oil company Petroci have extended a strike for an additional 72 hours as they sought to bring in employees from other companies in the sector to join their protest against layoffs, union officials said on Friday.

Fifty of Petroci’s 600 employees were made redundant last month and another 150 are expected to be dismissed, union leaders have said, in the wake of an audit recommending that the company cut costs and staff amid falling oil prices.

“Next week we will intensify the strike and see if other employees from other companies in the sector join the Petroci employees in this strike,” said Geremie N’Guessan Wondje, secretary general of the SYNTEPCI union.

Petroci offered to pay 10 dismissed managers six months salary while the 40 other laid-off employees were to receive eight months salary. However, a member of the company’s management said the union was demanding 20 months.

“That’s not possible. We don’t have all that money,” said the official, who asked not to be named.

Petroci is a small oil and natural gas producer but it is heavily involved in the downstream sector, controlling 36 percent of domestic gas distribution in French-speaking West Africa’s largest economy as well as about 30 filling stations.

It also partners with companies with production and exploration operations and manages a logistical base that services offshore blocks.

SYNTEPCI represents workers from 16 companies in addition to Petroci that could be called upon to strike out of solidarity.

Those companies include state-owned Societe Ivoirienne de Raffinage (SIR), which operates a refinery with a capacity of 65,000 barrels per day, as well as logistics firms and fuel retailers such as Total.