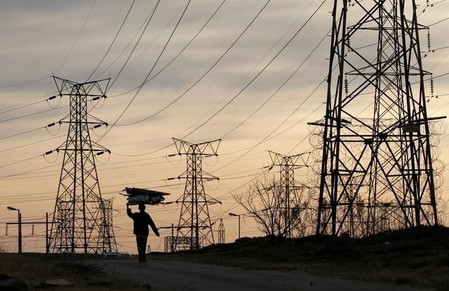 JOHANNESBURG (Reuters) – More workers at South African state-run power utility Eskom joined a strike over pay, their union said on Wednesday, in defiance of a court order preventing the industrial action at the state-run firm.

The company has branded the stoppage by thousands of National Union of Mineworkers (NUM) members which started on Monday illegal because its members are prohibited by law from striking, but said its operations had not been affected so far.

The labour dispute is the latest problem to beset Eskom, which has struggled to meet power demand in Africa’s most industrialised country due to its aging power plants and grid. However, it has managed a year without rolling blackouts that have hurt the economy in the past.

“Our message to the whole nation is just to keep calm. We are handling the situation, currently the situation is under control,” Eskom spokesman Khulu Phasiwe said, adding that he could not divulge the firm’s contingency plans.

NUM said on Tuesday that all of its 15,000 members at the utility, or close to a third of Eskom’s workforce, would stop work on Wednesday. [L8N1AQ41Q]

The union’s spokesman Livhuwani Mammburu said its members were on strike in provinces where Eskom runs its biggest plants, including in Mpumalanga province.

“Our members are aware that for them being involved in this strike there are consequences and they are saying they are fighting for the right cause,” said Mammburu.

Asked whether union members will be dismissed if they do go on strike, Phasiwe said workers would not be fired en masse but that each case will be handled on its own merit.

He said talks with the union had not yet collapsed and both parties were due to meet this morning for further discussions.

The utility is offering pay increases of 7 to 9 percent while NUM on Tuesday lowered their wage demand to 8.5 to 10 percent from 12 to 13 percent.

The stoppage at Eskom coincides with a strike over wages by around 15,000 workers in the petrochemical industry that has been going on since last week but has so far not caused any significant fuel shortages.