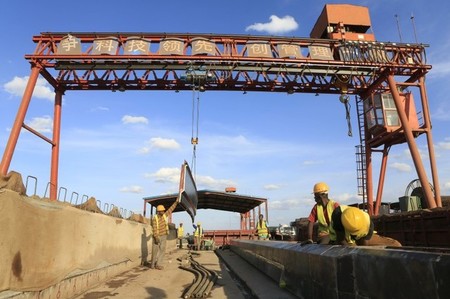 NAIROBI (Reuters) – Kenya’s economic growth is expected to accelerate both this year and next, helped by low oil prices, improved agricultural output, a supportive monetary policy and infrastructure investments, the World Bank said on Thursday.

However, the bank also warned of possible risks, stemming partly from uncertainty over Kenya’s presidential, parliamentary and regional government elections scheduled for August 2017.

“These (risks) include the possibility that investors could defer investment decisions until after the elections, that election-related expenditure could result in a cutback in infrastructure spending and that security remains a threat, not just in Kenya, but globally,” it said in a report on Kenya.

Other risks to the outlook include subdued prices of coffee and tea, key hard currency earners, the World Bank added.

Kenya’s gross domestic product will increase by 5.9 percent in 2016 and by 6 percent in 2017, above an estimated 5.6 percent expansion last year, the bank said.

The east African nation’s government expects the economy to grow by 6.0 to 6.5 percent in 2016.

The World Bank cited the benefits of cheaper oil, good weather that is supporting farming, an appropriate monetary policy stance and sustained investments in roads and railways.

But while Kenya’s economy is faring better than others on the continent, it is still struggling to create enough jobs, which means a large section of the population is not enjoying the benefits of the economic expansion, the bank said.

Most of the jobs being created are of low productivity in the informal services sector, the World Bank said.

In the next decade, nine million young people are expected to join the labour market, with most of them getting work in small businesses due to a scarcity of formal sector jobs, it added.

“Formal firms will not create jobs for all young Kenyans,” the bank said in its twice-yearly Kenya Economic Update.

The World Bank said in another report in early March that while Kenya’s economic growth in the past decade may be remarkable by Kenyan standards, it was not even close to stellar when viewed from a broader perspective.

(By George Obulutsa. Editing by Duncan Miriri and Gareth Jones)