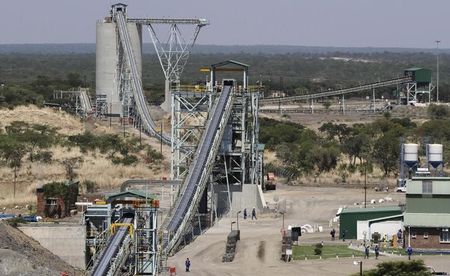 HARARE (Reuters) – Zimbabwe plans to impose a 10 percent tax on foreign-owned firms to fund a black economic empowerment programme that is designed to bring the companies under local majority control, a minister was quoted as saying on Monday.

Some of the companies that could be affected by the new tax include the world’s top two platinum producers Anglo American Platinum and Impala Platinum Holdings, which both have operations in the southern African nation.

Under Zimbabwe’s Indigenisation and Economic Empowerment Act passed in 2008, the minister of youth and empowerment can, with the approval of the finance minister, levy a tax on any company to raise money to fund the black economic empowerment programme.

Youth and Empowerment Minister Patrick Zhuwao told the government’s Herald newspaper that he would propose a 10 percent levy on all foreign-owned firms that have not complied with the law, known locally as indigenisation.

“For us to be able to fund empowerment programmes in the long term, we are proposing the introduction of an empowerment levy and we are empowered by law to propose the levy,” Zhuwawo was quoted as saying by the newspaper.

Zhuwao, a nephew to President Robert Mugabe who was appointed to his job on Sept. 11, could not be reached to comment further.

Efforts to introduce the levy in 2012 failed after then finance minister Tendai Biti, from the opposition Movement for Democratic Change party, refused to sanction its implementation.

Zhuwawo’s comments come more than a month after the previous empowerment minister said the government was relaxing the law in a bid to attract foreign investment.

Zimbabwe’s economy is expected to grow by 1.5 percent this year, half the government’s initial forecast, after weak global commodity prices hit exports and a drought halved the staple maize crop harvest.