Zimbabwe’s longtime President, Robert Mugabe, has announced the state will seize all of the nation’s diamond mines.

Zimbabwe’s controversial President, Robert Mugabe, has announced a massive change to the country’s diamond mining industry, in that all assets will now be state owned. In a move that is a throwback to his socialist roots, Mugabe claims that foreign mining companies have profiteered for too long off one of the nation’s most valuable commodities and he will ensure that the nation now reaps the rewards from its diamonds.

Mugabe gave an interview in early March to the state broadcaster ZBC, during which he expressed his anger at what he sees as foreign companies plundering Zimbabwe for a precious, natural resource. Mugabe claimed that, in doing so, foreign companies made around $15 billion in profits, while Zimbabwe itself had only earned $2 billion in the same period of time and, as such, the diamond rich region of Marange would now be a “state monopoly”.

The Marange diamond fields were only discovered in 2006 but by 2013 they were producing an astonishing 16.9 million carats of diamonds, which is akin to 13% of the world’s rough diamond supply. However, this output has dropped significantly due to reluctance by companies to invest in deeper exploration. Industry group Kimberly Process states that in 2014 Zimbabwe’s diamond production was around 4.7 million carats.

While it is understandable that Mugabe may feel the country needs to earn a greater proportion of the wealth that the Marange region is host to, issues of corruption and internal theft are perhaps as large a problem as outside sources. As far back as 2012, South Africa’s former President Thabo Mbeki warned that Zimbabwe was losing much of its diamond wealth to a “predatory elite” within its own nation.

The NGO Partnership Africa Canada (PAC), which monitors conflict minerals in Africa, produced a damning report in 2012 that stated government ministers in Zimbabwe were the ones becoming rich off the back of stolen diamonds. Corruption and theft were so rife that the organization said, “The scale of illegality is mind-blowing” and the investigation named former mines minister Obert Mpofu as having amassed an unaccountable fortune since mining began. Mpofu was said to have been spending $20 million “mostly in cash” over a 3 year period.

If high level government figures are the very people denying the state treasury of its rightful income from Marange’s diamond mines, then will a state owned monopoly make much difference? While Mugabe has angrily pointed the finger of blame abroad, it remains to be seen whether those now in charge of the state’s new body, Zimbabwe Diamond Consolidated Company, can ensure that the profits from diamond minds find their way to the rightful government coffers.

What is certain is that the foreign companies who have been mining in Zimbabwe will not take Mugabe’s orders without a fight. China has developed closer trade agreements with Zimbabwe in recent years and the Chinese-run mining company Anjin Investments has already challenged Mugabe’s ruling at the High Court. The early indications are that the courts might well side with the mining companies as the largest mine, Mbada Diamonds, has already won its case at the High Court and been given full control of its assets.

Whether this is a ruling that Mugabe’s government will accept and adhere by is an entirely different question. While some voices have expressed concern over how this dispute could affect trade between China and Zimbabwe, Mugabe himself dismissed such worries, saying, “I don’t think it has affected any of our relations at all…I told President Xi Jinping that we were not getting much from the company, and we didn’t like it anymore in this country.” 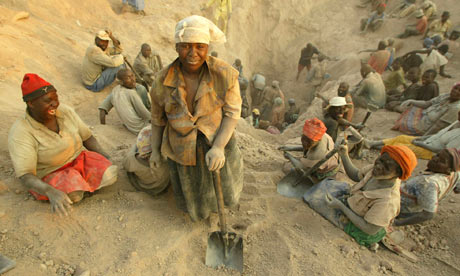 Where does Zimbabwe’s diamond industry go from here?

If the government of Zimbabwe overcomes the legal challenges, maintaining the $1 billion worth of Chinese trade despite seizing Chinese interests, and eradicates the corruption that has plagued the mining industry thus far, then it would obviously earn considerably more money. However, these are a sequence of unlikely outcomes given the manner in which the move has come and given the history of the mining industry in Zimbabwe.

There is the additional concern that potential investors in other mining projects within the country could be put off by this recent announcement regarding diamonds. John Turner, head of the mining group at law firm Fasten Martineau says, “To the extent that private firms were looking at Zimbabwe thinking they were ahead of the curve, this may give them pause for though.”

Any concerns outside of Zimbabwe have not appeared to weaken the resolve of Mugabe or his government. They insist that the problem lies with theft from abroad and moreover that recent mining has actually been illegal, as the mining companies had not renewed their licenses.

Amid conflicting claims and ongoing lawsuits, who emerges as having control over the lucrative Marange diamond mines over the next few months will be of interest to many parties and people both in and outside of Zimbabwe.