The region is experiencing a boom in development of railways to drive economic growth and benefit the environment.

High-speed rail travel is on a fast track in the Middle East and Northern Africa. More than $350 billion in rail projects are under way in the region.

The estimate represents major rail projects in 16 countries, according to Terrapinn Middle East, which is organizing the 10th annual Middle East Rail conference in Dubai March 8 and 9.

Rail travel has become increasingly appealing in the region as a greener alternative to auto or air travel.

While the United Arab Emirates recently delayed work on a high-speed rail project, other governments that are facing budget deficits because of the oil glut prioritize rail projects as a way to improve trade and increase tourism to boost their economies.

One of these countries, Saudi Arabia accounts for about one third of the total spending with projects totaling $118.9 billion.

A major Saudi project is the $55 million Haramain high-speed rail project, which will connect the holy cities of Mecca and Medina with Jeddah, the country’s commercial capital and second largest city. Following delays, it is expected to begin operations in early 2017.

The Saudis see rail development as key to the nation’s ambitions to attract more tourists, especially to the holy sites.

The Saudi kingdom drew 16 million tourists in 2014 and wants to double that number by 2030, according Fadh Al Rasheed, group CEO of King Abdullah Economic City.

The Saudis also are building a $12 billion four-line commuter rail network in Jeddah as well as a $22 billion six-line network in the capital of Riyadh.

While most projects are moving forward in spite of financial problems brought on by sharp reductions in oil prices, the United Arab Emirates in January suspended the bidding process for the second stage of its $11 billion Etihad Rail project and cut a third of its workforce. A project spokesman said the aim was to streamline operations before moving forward with bids. 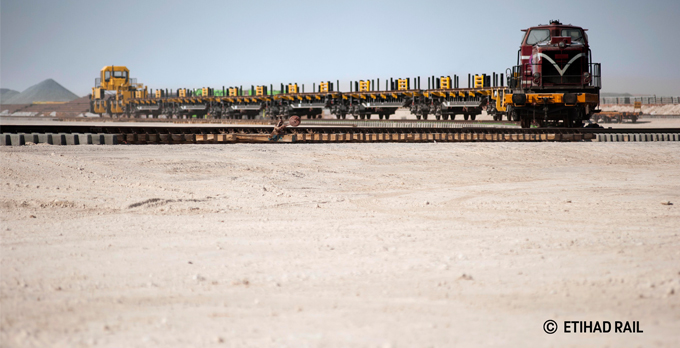 Saudi Arabia and the UAE have agreed with four fellow states in the Gulf Cooperative Council to build an integrated high-speed rail network linking their countries by 2018 at a total estimated cost of $200 billion. The other partner nations are Bahrain, Kuwait, Oman and Qatar.

The goal is to create an efficient regional network of freight and passenger rail lines.

The railway network will yield environmental benefits for the region and create new jobs while reducing dependence on more expensive air or auto travel, according to Feras Shadid, a rail asset management consultant.

With the lifting of sanctions, Iran is planning to develop a high-speed rail line linking the cities of Tehran, Qom and Isfahan. Terrapinn said Iran plans to spend $24.6 billion on rail projects.

China last month agreed to give Iran financial help with its high-speed rail line as part of an agreement to significantly increase trade to $600 billion in the next 10 years. China also wants to build a high-speed line linking the two countries.

Algeria, with a Terrapinn estimate of $34.4 billion, is developing light rail systems in Algiers, Oran and Constantine. While the projects have been delayed because of lost oil revenues, they are currently expected to be fully operational by 2020.

Egypt, with an estimate of $30.9 billion in spending, has projects including $1.5 billion to build a rail line linking 6th of October City to Cairo.

Morocco has an estimated $10 billion in projects, including a high-speed rail line that will connect Tangiers to Casablanca.

Farther south, Nigeria has $75 billion in rail projects, according to Terrapinn. High-speed rail service between Abuja and Kaduna is scheduled to begin operations in March. The line has nine stations.

Terrapinn released the estimates in advance of Middle East Rail 2016, the largest conference and expo devoted to rail projects in the region.

About 9,000 rail operators, government officials and contractors are expected to attend the March 8-9 event at the Dubai International Exhibition & Convention Centre. The expo will feature 300 exhibitors.

High-speed rails, or “bullet trains,” travel at significantly faster speeds than traditional trains. They can reach speeds of up to 350 kilometers per hour. They have been developed in Europe and East Asia.

Meanwhile, the boom in rail construction in the Middle East has caused worker shortages in other parts of the world.

For example, officials in Chennai, India said they have trained rail workers only to see them leave for higher paying jobs in the Middle East during the last two years, causing interruptions and delays.