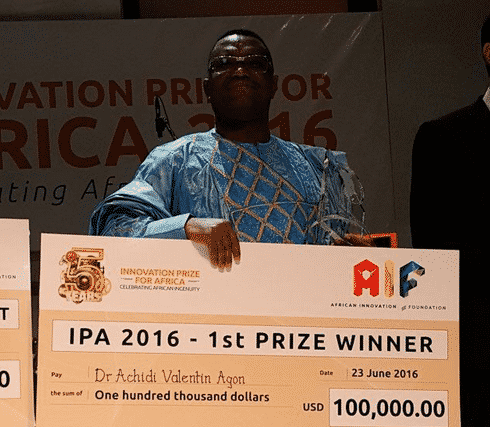 Valentin Agon wins $100,000 innovation prize for an effective and inexpensive treatment made from a plant extract.

A Beninese doctor has won a top innovation prize of $100,000 for an anti-malaria drug he developed from a natural plant extract.

Valentin Agon received the Innovation Prize of Africa in June for his creation of the drug, Api-Palu, which is already being marketed in Benin, Burkina Faso, Chad and Central African Republic.

The drug is significantly less expensive to produce than other anti-malarial drugs and is more effective.

“Api-Palu is a remarkable product that (has) affordability, a good safety profile, and a fast rate of malaria parasite clearance from the blood following short-term treatment at relatively lower doses,’’ innovation prize officials said.

Agon won first place in the competition among 10 finalists chosen from nearly 1,000 applicants.

Imogen Wright of South Africa took 2nd place for Exatype, software that helps health care workers determine whether HIV patients are responding to drug treatments. Eddy Agbo of Nigeria received the Special Prize for Social Impact for Urine Test for Malaria, a medical device that can diagnose malaria in less than a half hour. Wright and Agbo each received $25,000.

The awards program, a project of the Africa Innovation Fund, rewards healthcare solutions that address Africa’s malaria and HIV/AIDS problems.

Jean Claude Bastos de Morais, founder of the innovation competition, said the project had amassed a database of more than 6,000 innovators and made cash investments of $1 million since it began five years ago.

He said the award to Agon for his anti-malaria drug was particularly gratifying.

“A product for malaria coming from Africa for Africans, this is my dream. My dream comes true. Finding a solution based on a natural product is what I have dreamed about,” de Morais said.

Educated in Canada and Cuba, Agon has researched green medicines for 25 years and has spent 16 years developing the drug. He plans to use the prize money to increase production and hopes to distribute the drug in every country in Africa by 2017.

His discovery is cheaper because it is extracted from a plant that is abundantly available on the continent. It is also more effective than other anti-malarial drugs because it inhibits 3D7 strains of Plasmodium falciparum, which cause malaria, and can act against the disease within a few hours, the innovation judges said in awarding him the top prize. It is available in the form of tablets, capsules or syrup.

An estimated three billion people are at risk for malaria worldwide. The World Health Organization estimates that sub-Saharan Africa accounts for 88% of all cases of malaria and 90% of reported deaths.

“Some African governments spend up to 40% of their public health budgets treating malaria,” the innovation contest said. “In this context, Api-Palu, can be considered a significant contribution in the fight against malaria.”

According to the Centers for Disease Control and Prevention, Africa is highly vulnerable to malaria because the predominant species, Plasmodium falciparum, is most likely to cause death, and the climate allows transmission to occur year round.

In other areas of the world, such South Asia and Latin America, malaria is less likely to cause death but can still result in severe illness and incapacitation, according to the CDC.

The disease continues to be a serious problem, but eradication efforts are showing results.