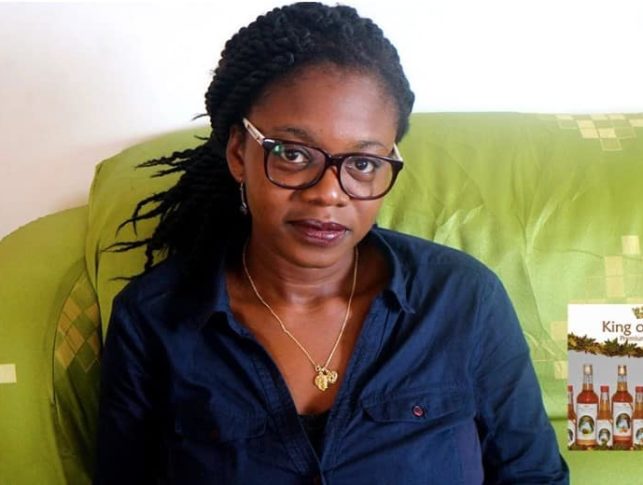 Entrepreneur Mabel Adekambi creates King of Soto, a new take on a traditional liquor that is growing in popularity.

Inspired by a tradition of fine palm wine produced in her native Benin, entrepreneur Mabel Adekambi in 2014 launched King of Soto, a high quality rum produced entirely with local ingredients.

“When we say ‘rum’ all over the world, we know it comes from the Caribbean. Why not have a proper product in Benin?” Adekambi asked.

Rum production begins with the harvest of sap from palm trees. Rich in yeast, it quickly ferments juice called palm wine. Then the wine is distilled to produce a liquor the Beninese call sodabi, or soto for short.

The nickname inspired the name King of Soto, rum produced from sodabi, spices and fruit.

Typically, rum-makers use wooden or aluminum barrels like those used in wine making. However, Adekambi found those were not available in country and would be very expensive to order. Instead she uses 20-liter gasoline cans.

The fruit, spices and sodabi are mixed together and stored cans for six to 12 months before the rum is ready for bottling.

Because sodabi is a seasonal product, it is difficult to produce large volumes of rum. King of Soto uses sodobi that has been distilled several times in order to achieve a refined liqueur.

Adekambi learned about rum production as a student in France.

After studying entrepreneurship, communication and tourism in France, she returned to Benin to work as a manager at Residences Celine Hotel in Cotonou.

King of Soto has become popular, mostly by word of mouth. Production rose from 10 bottles a month to 100 bottles within the first year of operation. The rum is sold in super markets for less than $2.

Sodabi is common liquor in West Africa, although it goes by different names in different countries: koutoukou in Ivory Coast, Akpeteshie in Ghana or Ogogoro in Nigeria.

Each region has secret methods for extracting the palm wine, which creates a variety of tastes and styles.

In Benin, the name sodabi derives from the name of its inventor, who learned distilling techniques from Europeans about 100 years ago. A staple of celebrations in Benin

Benin, especially the region of Adja, is well known for its expertise in producing sodabi, according to Professor Koblévi Aziadomé, former minister and director of the Benin agricultural research center.

Often sold in plastic bottles, the popular beverage is consumed at celebrations and festivals.

Some people add plants, spices or fruits in their sodabi to give it medicinal properties or special tastes.

In the past, producers have failed to adequately ferment or distill the sodabi, giving it dangerous levels of methanol and creating a negative image. Both Benin and Ivory Coast have at times banned its production.

Adekambi believes King of Soto will only grow as the quality and flavor of her product becomes more widely known.

She sees King of Soto as both a business and a patriotic effort as it grows into an export product and employs more people. “For the moment, it is not profitable. But it will become profitable and hundreds of families in Benin will benefit.”