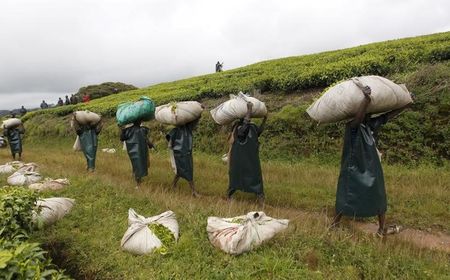 KIGALI (Reuters) – Burundi’s tea export revenues jumped 52 percent in 2015 from a year earlier, thanks to a fall in output of regional rival Kenya, a tea board official said on Wednesday.

“The decline of Kenya’s tea production largely contributed to drive up prices and earnings for Burundi’s tea,” Joseph Marc Ndahigeze, the head of exports for the Burundi tea board (OTB), told Reuters.

Tea is Burundi’s second-largest earner of hard currency behind coffee and supports 300,000 farmers in a nation of 10 million people.

OTB, which exports 80 percent of its tea through a regional weekly auction held in the Kenyan port city of Mombasa, said tea export revenue totalled $32.4 million last year, up from $21.3 million in 2014, with export volumes rising by 6.6 percent to 10,495 tonnes.

The rise in Burundi tea exports has come despite nine months of political chaos that has resulted in 400-plus deaths, pushed 240,000 people into exile and hampered many elements of the nation’s fragile economy.