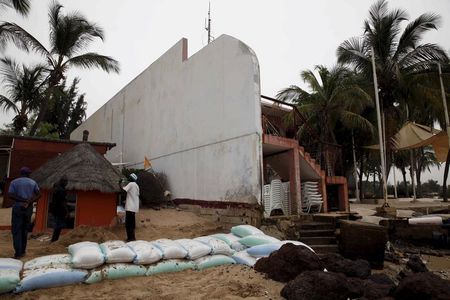 SALY, Senegal (Reuters) – The European winter is the high season for tourism in Senegal as visitors flock to its sea and sun to escape the cold, yet since last year the doors of the luxury Hotel Espadon have been closed.

Its swimming pool has turned a swampy green. The skeletons of old parasols poke out from the sand and the sea gnaws at the foundations of its pretty beachfront rooms.

The problem is not high prices or mismanagement but coastal erosion that is blighting the West African country’s coast.

The Atlantic has washed away beaches, forcing hotels to make a drastic choice: save their property by building sea walls that block the view or let the water rise and risk losing everything.

“Every day I receive tourists who come to see if it’s true what they say about the Hotel Espadon’s current state,” said Sonore Khadim Tall, the building’s superintendent. “They can’t believe their eyes and some of them even cry.”

As a Paris summit focuses on climate change it is tempting to place the whole blame for Senegal’s erosion on rising sea levels but reckless building on beaches compounds the problem, said Papa Goumbo Lo, head of Senegal’s national institute for scientific research.

The problem arises when builders construct too close to the beach or extract coastal sand for projects, exacerbating erosion and rendering buildings vulnerable to tides.

Tourism accounts for 11 percent of Senegal’s economy, but over time erosion could affect the country as a whole, given that two thirds of the population live in the coastal region around the capital Dakar.

Other countries in the region are affected. Gambia’s 15 coastal hotels are at risk due to erosion. Nigeria’s environment ministry has launched a programme to fight erosion and Ghana, which has 1 million annual visitors, has built a 30-km sea wall.

Around 1 million people also visit Senegal every year and in 2014 the government set itself the goal of tripling that number.

Saly, where the Espadon is located, is one of the country’s biggest tourist hubs but risks missing out. Since 2010, the town 50 km (32 miles) southeast of Dakar has lost 30 metres of beach.

Ousmane Diop, head of environment and client relations at the nearby Filaos Hotel, said visitors who return to the hotel these days are drawn by loyalty to the staff rather than the beach.

Only a postcard of the beach remains and the water is accessible across a ramp beside a sea wall.

“If we hadn’t built the wall, the ocean would have been in the restaurant,” Diop said, pointing at an open-air dining area with a sea view.

Tourism in West Africa has already been hit by perceptions of insecurity in countries like Mali, where Islamist militants attacked a luxury hotel on Nov. 20, and disease, after Ebola killed thousands in Guinea, Liberia and Sierra Leone.

Senegal tried to offset the problem in May by scrapping visa requirements and halving airfare taxes.

But numbers from the World Travel and Tourism Council show visits have been flat this year compared to last year and tourism employees in Saly say their numbers are down. Many hotels along the coast closed early last season.

For his part, Ernest Dione, national coordinator for the Ministry of the Environment, defended government initiatives, pointing to its study on erosion and an emergency action plan.

It is possible to recover lost beaches through the use of wave breakers and other tools but it is expensive, Lo said.

The work has started in Saly, where boulders line the shore to break waves. Some beaches have already been recovered but the process stands incomplete for lack of funds.

These initiatives are inadequate and to solve the problem beach homes responsible for erosion in the town should be torn down, said Ousmane Diouf, an artist at the Filaos hotel.

“As long as man destroys nature, he destroys himself,” he said.